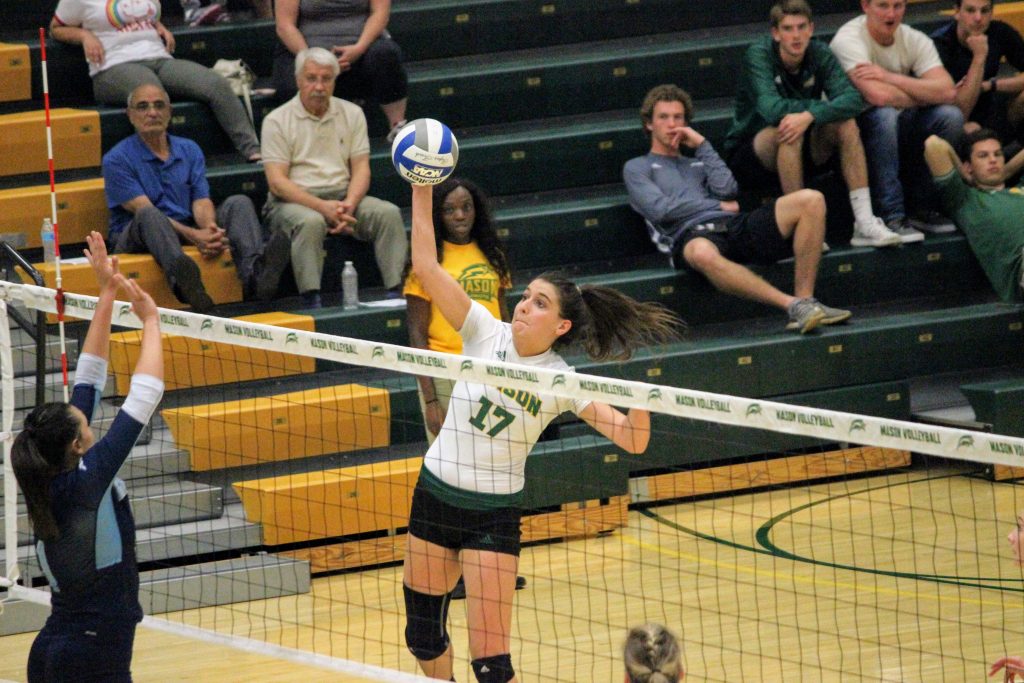 It’s been a long journey for Mason Women’s Volleyball— for the 2017-2018 season, they had six wins. More than half way through this season, they have already matched this total. This can be attributed to freshman standout, Peyton Ehmke.

“I started playing volleyball about the 3rd grade and…ever since then I just loved the game and everything about it,” she said.

When she was 14, Ehmke decided she wanted to play volleyball at the collegiate level, and she has yet to disappoint.

Currently leading the team in kills, Ehmke was named Atlantic 10 Co-Rookie of the Week twice. These honors are not the reason she plays, but rather she looks at them with appreciation and admits that “they remind her that [she is] still contributing, and doing what [she’s] supposed to be doing.”

No stranger to high levels of competition, Ehmke played in older age groups for her club volleyball team. In her senior year at Santa Margarita High School, she led her team to the Division I State Championship.

Ilkson saw that same competitive nature in Ehmke during her transition into college.

“She’s gritty, she’s tough” said Ilkson. “We could yell at her all we want and she wouldn’t crumble under the pressure, and would still rise to the occasion.”

This became clear as early as their first practice.

Five minutes into the first practice of the year, Ehmke went into anaphylactic shock because of a nut allergy. The next day however, she was back, ready to compete and get better.

Ilkson believes toughness sets the tone for the rest of the team.

When asked about being a leader as a freshman, Ehmke dismissed any challenges.

“I’ve always been big on leadership,” she said.“I gravitate to that role and like to set the example.”

Both Ehmke and Ilkson believe that their 2018 freshman class is helping change the culture for Mason Women’s Volleyball. Ilkson commented on the level of meticulous preparation the girls bring week to week, stating that the “freshman class is the next level of Volleyball IQ.”

Ehmke added, “Our freshman class definitely got a lot of potential for the future.” Building on that she discussed the importance of “showing the incoming freshman for the next couple of years how we do things here and how competitive we want to be.”

Both Ilkson and Ehmke have a goal of making the Atlantic 10  Championship this year and their goal for the future is to win it.

Ehmke and the Patriots will next play at home on Nov. 2 against Davidson for Senior Night.

*All statistics are final as of Saturday Oct. 13

View all posts by Karl Panton →

Those Who Tackle Together Stay Together