The Patriots ground the Flyers 2-1

Mason women’s soccer team started conference play with a win on Sept. 20. The Patriots beat the Dayton Flyers 2-1 to win their second straight game and their fifth of the last six. Freshman forward Emma van der Vorst scored the winner in the 53rd minute when the Netherlands native tucked a penalty past the keeper and into the bottom left corner to put the Patriots ahead for good.

“I’m thinking about what corner I want to shoot, and thinking about the movement,” van der Vorst said about her routine when she steps up to take a penalty. “I just know what I’m going to do. I know how to shoot a ball.”

The freshman sensation has now scored six goals in the past six games, its second longest scoring streak in program history.

“It’s an amazing feeling and I just really want to thank my teammates,” van der Vorst said about her recent goal scoring form. “They really give me confidence and give me good balls to score.”

Patriots head coach Todd Bramble had high praise for his striker as well.

“She’s got good goal scoring instincts, and she’s got a high soccer IQ,” head coach Todd Bramble said about his strikers recent play “The thing we like most about her, she’s not where she wants to be as a player. She still knows the areas she wants to improve in.

Mason drew first blood almost instantly Thursday night, when an attack started by forward Jewel Christian out on the left wing ended in a goal for fellow forward Kayla Hamric in the 5th minute.

Dayton began to push back after the opening goal. They controlled much of the ball for the rest of the first half, and their forwards successfully pressed the Mason defenders to win the ball back in midfield. The Flyers finally drew even when a wayward cross from defender Nadia Pestell sailed into the side of the net in the 38th minute.

The contest remained level until Mason won the penalty in the second half.

The Patriots held off a late Dayton surge and walked off the field victorious in their opening game of conference play.

Mason has now come out on top in five of their past six contests. They got off to an ideal start to their A-10 schedule as well, but van der Vorst still believes they have room to improve. 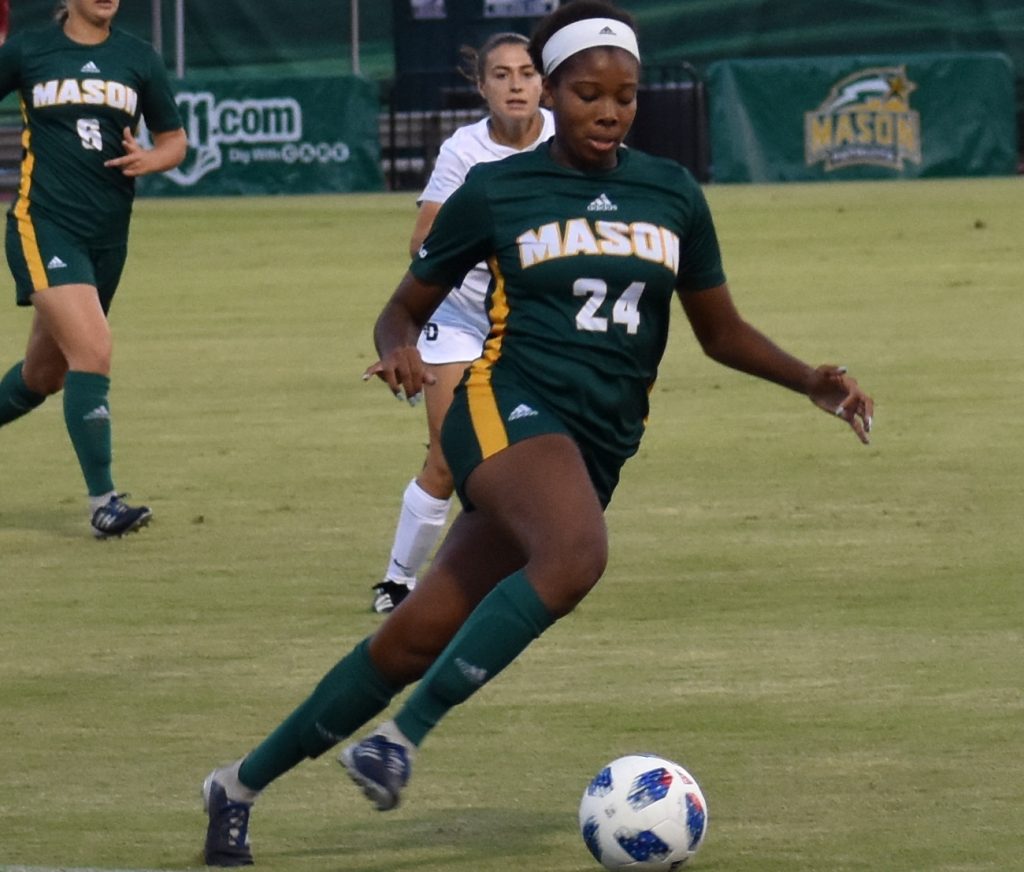 “We have a lot of things we can improve and we see every game we’re improving and it’s getting better and better,” she said.

“That’s the objective,” Bramble said about Mason’s recent run of wins. “Let the non-conference part of the season prepare us to be ready to go and we had a little positive momentum coming in.”

“I think it’s huge,” Bramble said about winning the importance of winning their conference opener. “Everybody’s a little bit nervous coming into the first conference game because it’s got a different feel to it.”

Now with the nerves of the initial contest shaken off, Bramble knows that this team can only get better from here.

“We’re not where we wanna be yet, but we are in a pretty good place, with nine games left to go in conference now,” Bramble stated.

The Patriots have improved to 6-3 on the season and 1-0 in A-10 play. They will be back in action Sunday, when they travel to Richmond to take on VCU in another conference clash.