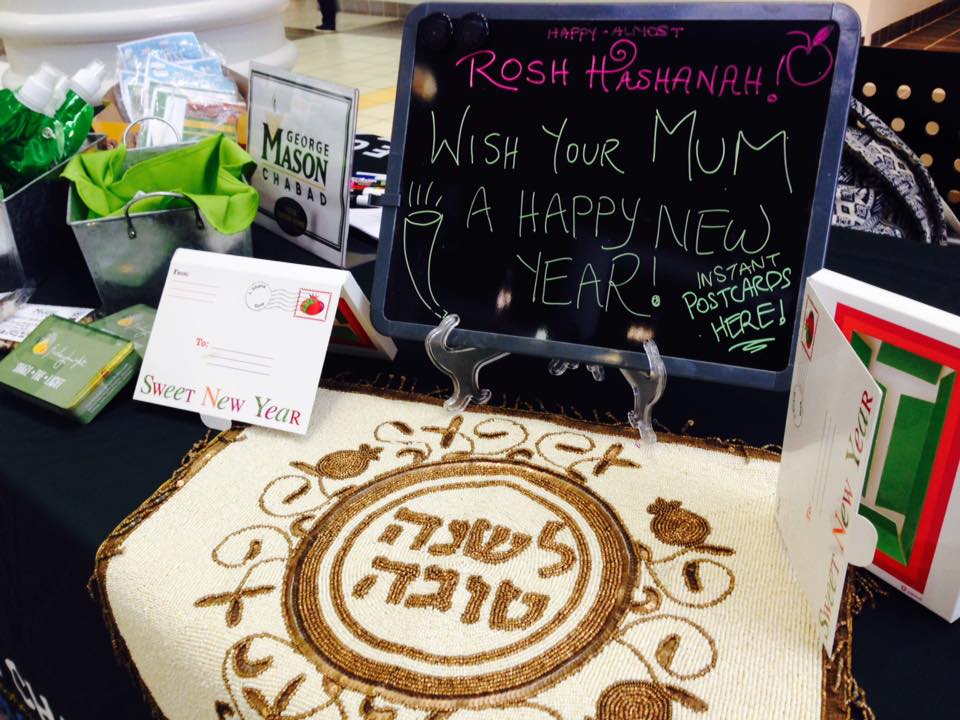 Photo courtesy of Chabad at GMU

On Sept. 9 – 11, Mason’s Jewish population will be celebrating Rosh Hashanah. Rosh Hashanah, which translates to “head of the year,” is the Jewish new year. Rosh Hashanah  is also the beginning of the Jewish “High Holidays.”, called such because it includes four different holidays.

“The first one is Rosh Hashanah on September 9 –10,” said Na’ama Gold, executive director of Mason Hillel. “The second one is called Yom Kippur, or ‘day of reminiscence,’ and it’s a day that the Jewish people are fasting for 24 hours hoping to get forgiveness for all of their actions throughout the year.” Mason Hillel will hold rabbi-lead services for Rosh Hashanah with the community from Sunday evening to Monday morning.

Rosh Hashanah celebrates the creation of the world and is a rebirth for the Jewish people. “It’s a fresh start,”said Mitchell Westall, president of Chabad at GMU. “It’s something that you start over, you bring in the year, you try and set the tone for the rest of the year in a good way. Rosh Hashanah is supposed to be positive, it’s supposed to be upbeat.”

To further symbolize the holiday, one tradition includes eating apples and honey, to symbolize healing and the hope of the new year.

During the ten days between Rosh Hashanah and Yom Kippur, God judges all people to decide whether they will go into the Book of Life or the Book of Death in the coming year. During this time, people who fall in the middle can perform “Teshuvah,” or repentance.

The third holiday is Sukkot, which is the celebration of the Jewish people who walked for 40 years in the desert before finally arriving at their homeland, Gold said. Mason Hillel will be building a Sukkot at East Plaza so students may eat and sit in the hut for the entire week during Sukkot.

Finally, the fourth holiday, Simchat Torah is the celebration of the book of the Bible.

Jewish holidays are different from other traditions because the holiday lasts from one sunset until the next sunset, rather than starting at midnight and lasting until midnight the next day. “For instance, Sunday would start on Saturday evening, and so the first day starts on Sunday evening, which is Monday,” Gold said.

Chabad at GMU is celebrating the holiday through many different events during Rosh Hashanah. On Sept. 10, they plan to hold “Shofar in North Plaza” and “Sweet Holiday Dinner.” Shofar in North Plaza is the blowing of the Shofar, which is a trumpet made from a ram’s horn. The Shofar symbolizes as a call of repentance.

“What Chabad tries to do is they try to be there for us who can’t [go home],” said Westall. “So, I’m not going to go all the way home for the holidays. There are other people who live in places like Atlanta, Long Island, Australia. No one’s going home if you live that far. We try and be like a student family.”

For student’s outside of the Jewish community, Gold said the most important thing you can do for the Jewish community is to be aware. “The Jewish population is less than 2 percent of the community and sometimes our holidays…it’s hard to notice them but it’s one of the most important dates and holidays for the Jewish people,” Gold said. “I think just be aware that these things are happening and if they have any Jewish friends say ‘Happy New Year.’ In Hebrew we call it ‘L’ Shana Tova.’ It just makes them feel home when they’re not here.”

The Importance of Student Press Freedom