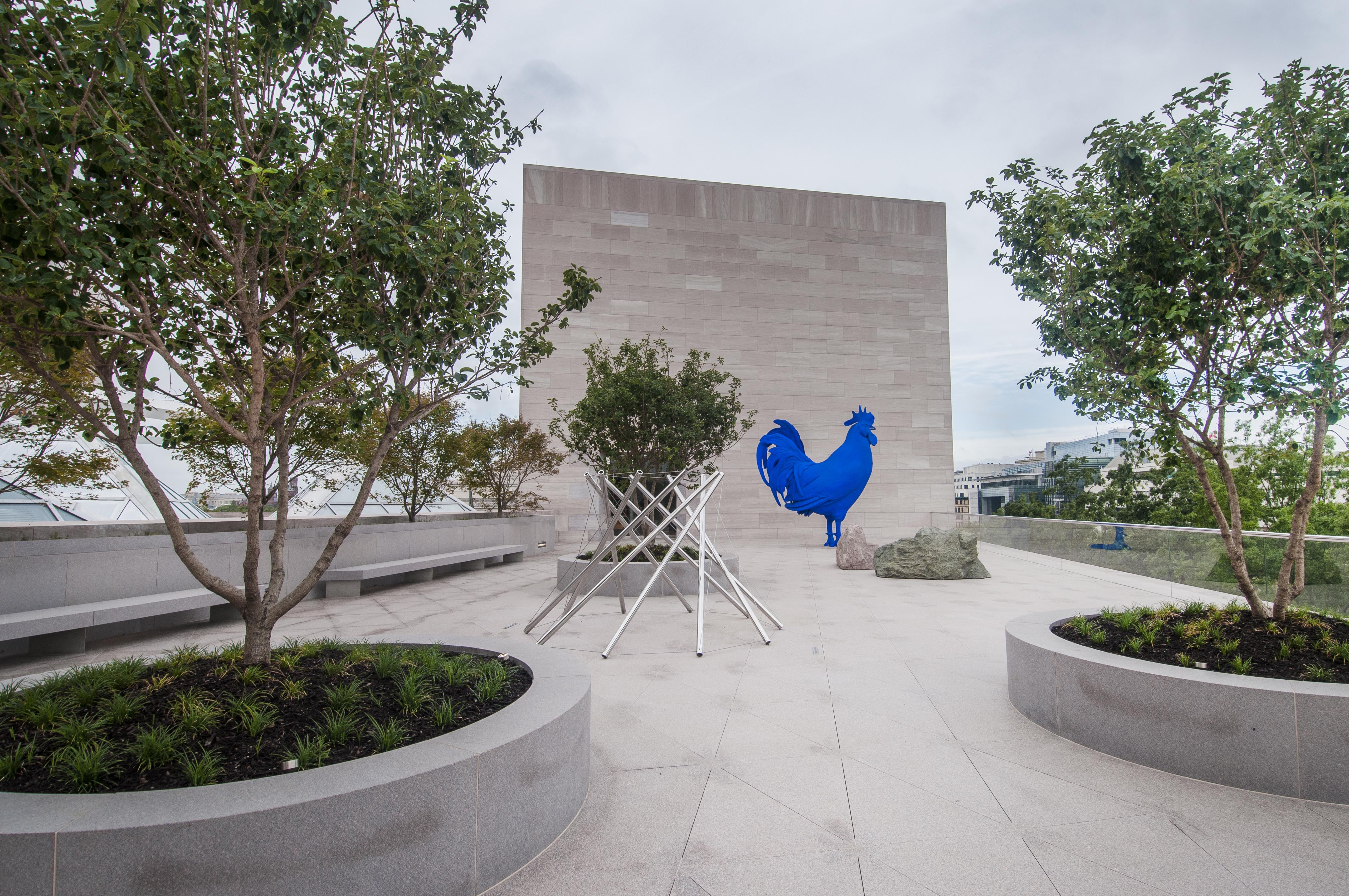 Photography of the new Roof Terrace of the National Gallery of Art East Building. Several sculptures are on view, including Hahn/Cock (2013) by German artist Katharina Fritsch

(Photos courtesy of the National Gallery of Art)

I wouldn’t be the first to compare Pollock to Pavement, with their shared jumble of paint (words), brushstrokes (lyrics) dripping with irony. Art and music go hand in hand. It only seems logical to explain one with the other, to compare a work to a song, a collection to a genre.

The National Gallery of Art recently reopened its East Building, which houses modern art. The press was allowed a sneak peek on Sept. 27. (It opened to the public on Sept. 30.) The museum added 12,250 square feet for exhibitions, including two tower galleries and a rooftop terrace.

I’ll get to the art—and the music—in a moment.

Have you heard of the Uncanny Valley effect? Don’t Google it. It explains why clowns are scary, aside from all the bad press of late. Essentially, when something looks close enough to maybe be a human but is just clown/robot/etc. enough to be different, it freaks us out. Have you seen those realistic-looking robots? Again, don’t Google it. They’re terrifying. We expect them to behave one way, and then they don’t. That’s why most drawings of aliens creep you out.

One of the gallery’s new acquisitions is Barbara Kruger’s “The Future Belongs to Those Who Can See It,” a collection of her “picture practice.” Kruger took photos from magazines and pasted slogans across them. A Rockwellian picture of a girl admiring a boy’s muscles becomes “We don’t need another hero.” A woman getting some sort of eye exam is “Know nothing, Believe anything, Forget everything.”

Perhaps that’s why Kruger’s work is so unsettling; it takes the familiar, twists it just enough so we still recognize it, and gives it back to us with a robot head screwed on.

A better, less nightmare-inducing (I promise, I really liked the exhibit!) metaphor might be grunge rock, with its scathingly sardonic commentary on politics,  Americana and cultural mores.

The lyrics to Hole’s “Doll Parts” read something like a Kruger piece: “I fake it so real I am beyond fake.” Smirking self-awareness springs eternal. It was relevant when Kruger worked at Condé Nast in the late ‘60s and early ‘70s, it was relevant when “Live Through This” came out in 1994 and it feels searingly relevant in 2016. 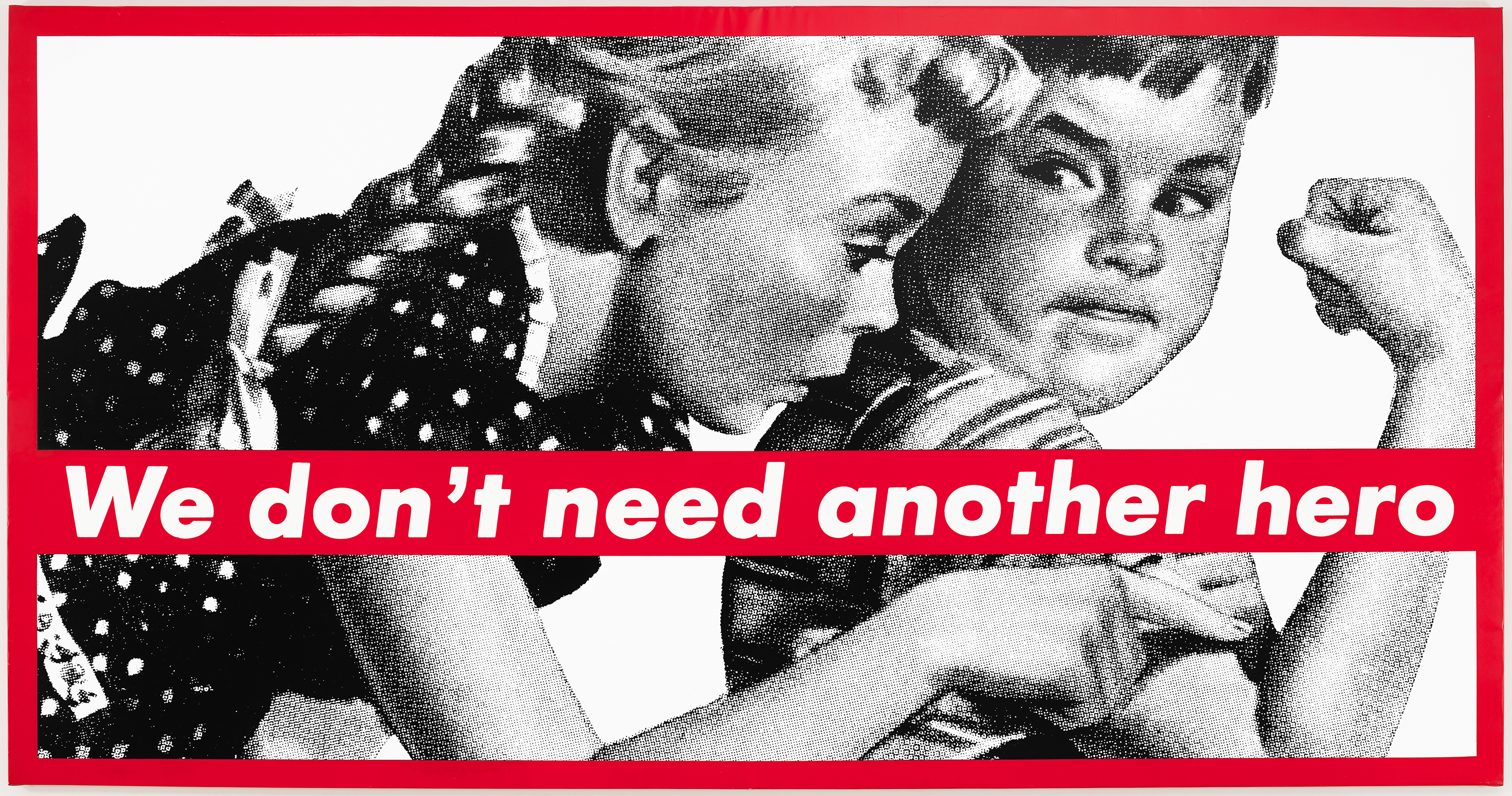 The gallery also recently added an exhibit called “Los Angeles to New York: Dwan Gallery, 1959-1971,” made up of highlights from famed gallerist Virginia Dwan’s personal collection. Dwan’s gallery in Los Angeles, opened in 1959, gave many artists their first shows in the city. She was fond of abstract expressionism and nouveau réalisme. Her second gallery, opened in New York in 1966, championed minimalism and conceptual art.

It’s difficult to distill such a varied and experimental collection down to a few pieces that exemplify a cohesive theme. There are sculptures, sketches, photos, paintings. The theme doesn’t lie in the objects themselves, but in their juxtaposition. The exhibit is a celebration of the bold, the different, the new. It’s a rejection of all the old rules, a rebellion against the old norms.

Abstract impressionism is the artistic counterpart to early-20th century experimental music like that of John Cage. Cage played a “prepared piano,” one with assorted objects inside in order to produce different, unnatural sounds. He played around with the accepted musical norms and composed music that lacked a cohesive theme. His “4’33”” is four minutes and 33 seconds of silence. To the untrained ear, it’s the opposite of music. But the beauty comes from the environmental sounds that become clear. It’s an intricate symphony, if you give it a moment and listen close enough.

Robert E. Meyerhoff and Rheda Becker gifted the museum with 34 large-scale photographs. The photographers each play with the medium, bending it to their will.

There’s an old quote from photographer Richard Avedon: “All photographs are accurate. None of them is the truth.” Exhibit A: Thomas Demand’s “Clearing,” which looks like a serene picture of the dawn breaking in a clearing.

It’s not a clearing.

Or, at least, not a real one. Demand made 270,000—that’s four zeroes—individually die-cut paper leaves and attached them to a 50x18x32 metal frame to simulate a forest scene. (He destroyed it after he took the picture. I know.)

Another photo is a self-portrait by Thomas Ruff. There are two Ruffs in the picture—one looking off camera, arms crossed, holding glasses. The other Ruff, set behind him, stares straight into the camera, almost menacingly. It’s a feat of photo play from the pre-Photoshop era. But which Ruff is the real Ruff?

Other photographs depict scenes with symmetry that’s a little too perfect to be real. Every piece plays with the bounds of reality.

It calls to mind the work of ambient art-rockers like Reykjavík’s Sigur Rós. The trio’s experimental soundscapes and ethereal vocals sound like sweet dream-pop nothings. But upon closer listening, the words don’t mean anything at all, in English or Icelandic. They’re singing in Vonlenska, or Hopelandic. It’s a language too pretty to be real.

The works housed in the East Building are as varied as the artists who made them. There are high, sharp sopranos. There are dark, low basses. The diverse pieces come together in harmony to form a rich symphony. If you like pop music, try Roy Lichtenstein. If you like art-rock, try Picasso. If you like indie rock, try Cindy Sherman.
There’s something for everyone at the renovated gallery, if you just listen.