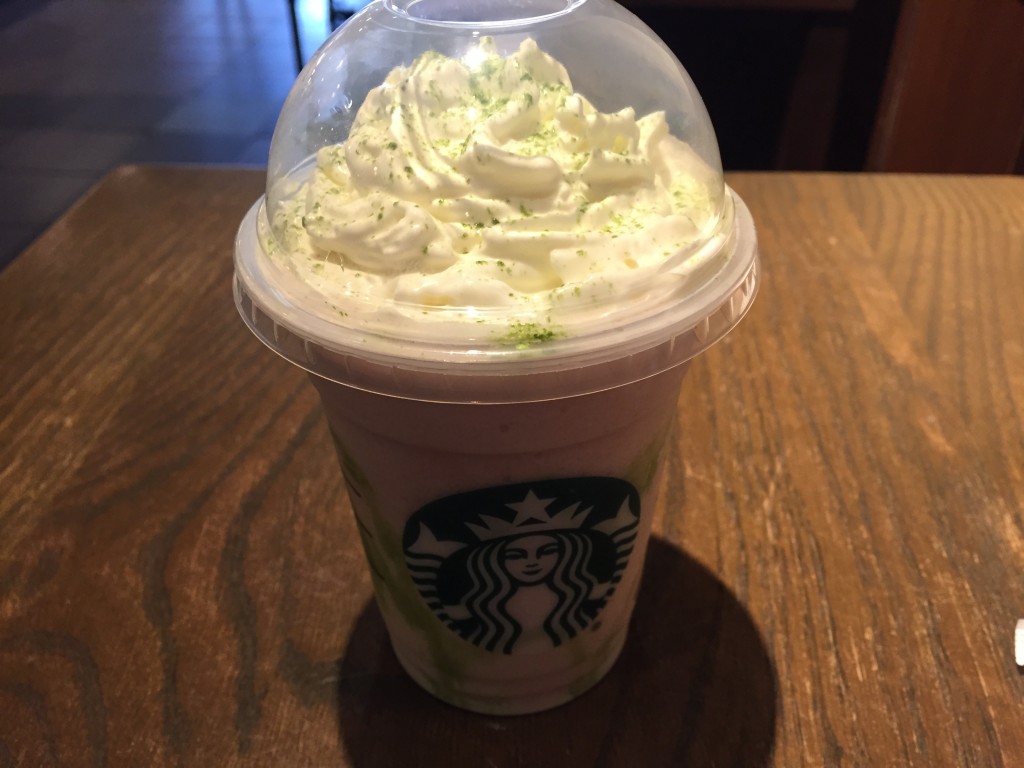 The only thing shorter than the actual cherry blossom blooming period in Washington, D.C., was the time we had to sample Starbucks’ new, limited-edition Cherry Blossom Frappuccino (CBF).

The beverage was available at Starbucks for five days, March 15-20. According to Starbucks, the CBF is made of a Strawberries and Cream Frappuccino base, white chocolate sauce and matcha drizzle, topped with whipped cream and a sprinkling of matcha, which is a powder made from green tea.

The hashtag #CherryBlossomFrappuccino hit Facebook on March 14. The power of social media let Starbucks to get their message out fast, so folks could sample the frap before it left stores.

What is perhaps more baffling than the limited release of this drink is the flavor combination. Despite the name, there is no cherry flavor in the drink at all.

The CBF is based off the appearance of the D.C. blossoms, primarily pink, with green swirls mixed in and a sprinkling of matcha on top.

“I didn’t get a chance to try he Frappuccino, and I’m not a big fan of cherry,” Mohney said.

Oftentimes with limited edition-drinks, Starbucks will notify their app users of new in-store specialties. But with the quick release and disappearance of the CBF, Starbucks did not have time to notify app users.

“I didn’t try the Frappuccino because I thought it sounded kind of strange, which is why I didn’t buy it,” junior conflict analysis and resolution major Ashley Buttaro said.  “It sounded like it might taste like a perfume.”

After speaking with junior communications major Kassandra Gardner, who works at an off-campus Starbucks, it was clear that the CBF was a surprise to some of Starbucks’ own. “It came out of nowhere,” Gardner said. “I heard about it on social media before I even heard about it from the store.”

In their press release, Starbucks made it clear that the drink was limited edition. Still, many were disappointed about the limited availability.

“I think they need to offer it for a longer period, like for the entire Cherry Blossom Festival and a bit after,” Mohney said.

Gardner agreed, adding, “by the time the CBF is popular, it will already be gone.”

Starbucks lovers and cherry blossom tourists will not even be able to sip on their CBF while viewing the blossoms, unless they recreate the drink (which the folks at Bustle figured out how to do).

Taking all the craze into consideration, I decided to try the beverage myself.

I am always game for a trip to Starbucks, especially to try a limited-edition drink. After I read the description of the CBF, I was intrigued by the fact that it was not cherry-flavored, which was actually comforting because I associate anything that tastes like cherry with my childhood medication.

Having tried and enjoyed both the Strawberries and Cream Frappuccino and the Green Tea Frappuccino, I had to try the new flavor, which is a combination of both of these.

The strawberry flavor was predominant, with occasional hints of the matcha green tea. And had I not known that the white chocolate sauce was added, I would have said there was something in the drink that I did not like, but I could not identify the flavor.

Overall, I’d probably drink the CBF if someone bought it for me, for politeness’ sake, but I would never go out of my way to order it again.

Bottom line, if I wanted a drink that tasted like a CBF, I would have a strawberry milkshake, or a bowl of Neapolitan ice cream.

So if you missed the CBF, don’t be sad, because I have a feeling you won’t have to wait long for a new drink from Starbucks (#ToBeContinued).