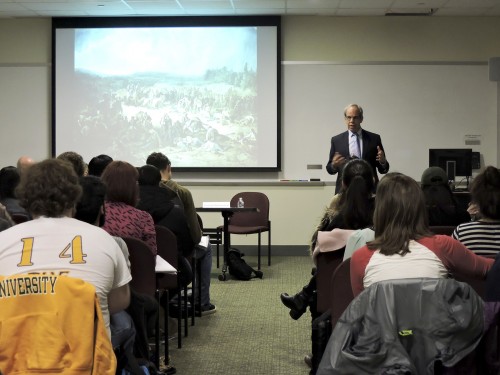 Leonard Rubenstein, from Johns Hopkins University, described the intersection of medicine and warfare at a panel event on campus Feb. 24. (Megan Zendek/Fourth Estate)

On Feb. 24, a panel of experts met on Mason’s campus to discuss ethical issues that plague current national security policies in regards to global health.

The panel, “National Security and Global Health: Human Rights, Ethics and the Way Forward,” was accompanied by the launch of the Global Health Fellows program, a new addition to the Arlington Fellows which offers various and challenging semester-long programs for Mason undergraduates at the Arlington campus.

The two distinguished guest panelists were Lawrence J. Korb, former assistant secretary of defense (1981-1985) and senior fellow at the Center for American Progress, and Leonard Rubenstein, director of the program on Human Rights, Health and Conflict for the Center for Public Health and Human Rights at Johns Hopkins University. Mason professor Dr. Lisa Eckenwiler, who teaches philosophy and health administration and policy, moderated.

The discussions and presentations from the panelists and Eckenwiler highlighted the importance of recognizing the intersection between national security and global health.

This connection is currently a heated issue and can be seen in “outrage over the use of vaccination programs in the covert raid on Osama bin Laden, to civilian casualties from drone strikes, to the conflation of health care services with support for terrorism in counterterrorism laws,” according to the event’s website.

At the forefront of the panel discussion were the ethical debates over counterterrorism policies within the intelligence community. Rubenstein, for his part, elaborated on the ethical implications of warfare in medicine.

This moral duty to treat “the enemy” is an ethical debate that “conflicts with many of the counterterrorism policies adopted by the U.S. post-9/11,” Korb said.

“[Drones may] detach human beings from the ability to physically be connected to the areas in which they are bombing,” Korb said. “Detachment creates a dissonance between the reality of a situation, and simply launching a bomb as though it were a video game.”

Eckenwiler brought up the dilemma of hospitals being used as targets of warfare, such as what has taken place in Syria.

“The current decision-making apparatus has no mechanism to account for these [civilian casualties] harms,” Eckenwiler said. If ethical implications are not considered in the decision making process, the system can be considered “morally impoverished,” she said.

The issues of the modern era indicate that moral and ethical questions surrounding global health continue to face challenging and ambiguous territory as security measures become a crucial priority, according to the event website.

“I think a lot of people are blinded because it’s not reported in the news,” freshman Christina Makhlouf, a biology major, said of the intersection of global security and health. “People need to realize this [global health] is an essential priority, health is so important in maintaining order and control to keep everything stable.”

The Global Health Fellows program will be a 15 credit semester-long academic program for selected students who are interested in health practice, policies and challenges in a global context, according to the Global Fellows website.

“This [program] is no extra tuition,” said Dr. Lisa Breglia, associate professor and director of the Global Affairs and Global Interdisciplinary programs. “In fact, you can get a couple hundred dollars in stipends to travel to the Arlington campus.”

The program will be of specialized focus in global health and will entail two philosophy courses and a course in bioethics in addition to a six credit internship, which the program will help accommodate for students.

Classes will be Tuesdays and Thursdays, while Mondays, Wednesdays and Fridays will be freely available for students to work on their internships.

“[It’s] a wonderful idea for students who are concentrating in Global Health. It’ll bring about more concern for the issues that were raised at this panel, and it’s a great opportunity for people within this major to get closer to like-minded peers,” Makhlouf said.

At the closing of the discussion, Korb put it simply after bring asked what his message to the younger community would be regarding living in a world in which these issues are becoming of greater importance.

“Get involved in programs and discussions,” he said. “It is so important for yourselves, for the country, and for the world that young people start talking about these huge concerns.”

Mason Scholarship application gets a revamp