On Sunday Jan. 31, the City of Fairfax Commission for Women sponsored “HUMAN TRAFFICKING: Get the Facts and Take Action,” a free public event that highlighted the importance of community support and awareness, specifically in the Northern Virginia area.

Elizabeth Scaife, director of training for Shared Hope International, was the event’s keynote speaker. Scaife told the audience about her initial introduction to human trafficking, which took place while she was working overseas. She returned to the United States wanting to help these victims and subsequently began working for Shared Hope International. While Scaife initially wanted to work toward helping international victims of human trafficking, she now works with domestic victims, many of whom are in the Northern Virginia area. 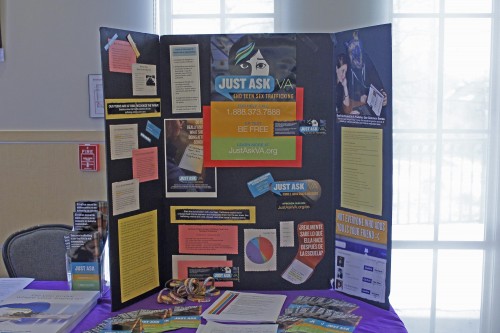 The Commission on the Status of Women set up a table to spread awareness to visitors about domestic human trafficking issues. (Claire Cecil/Fourth Estate)

According to the National Human Trafficking Resource Center, human trafficking is “a form of modern-day slavery in which traffickers use force, fraud, or coercion to control victims for the purpose of engaging in commercial sex acts or labor services against his/her will.”

Later in her presentation, Scaife displayed a picture of an iceberg and used it as an analogy for human trafficking: only a small part of the iceberg is visible above the surface and the majority is located beneath the water.

“This is a great analogy for the issue of human trafficking because this is a class of victims that does not self-identify. Most of what’s going on in their world is underneath the surface,” Scaife said.

The event also featured a panel comprised of members of the community who spoke on legal, educational and business perspectives. Elizabeth Payne, Ed. D.; Beth Saunders; Louise Shelley, Ph.D.; and Detective Bill Woolf with the Fairfax County Police Department sat on this panel, which Scaife moderated.

There were also three breakout sessions: “Law Enforcement and Legal Issues,” presented by Woolf and his partner FBI Special Agent Ted Delacourt; “Informing and Activating Students,” presented by Payne; and a session presented by Shelley and Saunders that discussed the business and international aspects of human trafficking.

Shelley is a Mason professor who works with the Terrorism, Transnational Crime and Corruption Center (TraCCC) through Mason’s School of Policy, Government and International Affairs. The founder of TraCCC, Shelley has had several years’ experience fighting human trafficking and managed programs in Russia, Ukraine and Georgia between 1995 and 2014. While Shelley’s work has focused mostly on international human trafficking, her work with the labor aspect of human trafficking has been vital to her current, locally focused work, according to Ehsani.

The event ended with each speaker giving their own call to action and a reminder that it’s always better to say something if you feel like something is wrong than to keep quiet.

Woolf used the story of a young girl who was approached by a 23-year-old male who was attempting to “groom” the girl for sex trafficking as an example. It was only when a guidance counselor began talking to the girl that authorities were able to help her and arrest the man.

“[We] are now talking about the issue, and that’s so important that we do talk about it … that we’re just asking the right questions, that we’re not just saying ‘Something’s not right with this situation, but I’m not going to get involved.’ So it’s all about this global responsibility. Not to sound cliché, but it takes a village to raise these children. We all have a responsibility,” Woolf said.

Dayton wins by 34 in rout of undermanned Patriots

Virginia presidential primary set to be on Super Tuesday