The Patriots are on the board. 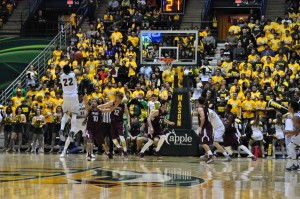 Mason’s shaky start to the season saw fewer ups than downs. After losses to Colgate and Mercer, Mason impressed at the Charleston Classic by toppling Ole Miss and Oklahoma State, both contenders in last season’s NCAA tournament, before losing the championship game to No. 6 Virginia.

Mason went 2-4 over the next six games that included a 20-point loss to James Madison, followed by wins against Longwood and Wagner to compile a 6-7 record and close out 2015. On the second day of the new year, Mason and VCU squared off in Richmond for both teams’ first A-10 match of the season. The Rams went on a 16-2 run late in the first to lead Mason 33-22 at the half, leading by as much as 27 en route to their 71-47 showing that saw the Patriots commit 22 turnovers.

The following week at EagleBank Arena, center Shevon Thompson put up his 19th career double-double against Saint Bonaventure, his third of the season, with 14 points and 17 rebounds from the 6-foot-11 senior. Mason lost to the then-10-3 Bonnies, who were carried by Marcus Posley’s 30 points, with a final score of 77-58.

In North Carolina, Mason could not hold on to an 11-point lead over Davidson, losing 81-75 as Mason redshirt junior forward Jalen Jenkins fell a single rebound short of a double-double.

Last Wednesday, Saint Joseph’s Isaiah Miles scored 26 points, and DeAndre Bembry added 16 to lift the Hawks over Mason 87-73. Marquis Moore posted 21 for Mason in a game that saw the Patriots close the gap to three points before a couple of dunks and a three-pointer helped push Saint Joseph’s to a lead of 11 with 11 to play, a deficit Mason could not close.

Mason finally found a conference win in St. Louis Sunday night. The Billikens were within five in the second, but Mason answered with a 10-2 run to produce a respectable win against a slumping St. Louis.

Matching a career high of 17 points in the game against St. Louis, freshman guard Otis Livingston II was named Atlantic 10 Rookie of the Week for the second consecutive week. The New Jersey native tallied 14 points in Mason’s loss to Saint Joseph’s last Wednesday and is the team’s second highest scorer of the season after junior guard Marquise Moore.

The Patriots are playing Wednesday in New York against Fordham (10-6, 1-4) before returning to Fairfax to face Duquesne (12-6, 2-3) on Saturday and Orange Line-rival George Washington (14-4, 3-2) on Sunday at EagleBank Arena.