A new and fresh version of an American classic play, “The Crucible,” was recently performed by Mason’s School of Theater at Harris Theatre.  The last showing of the play was November 1, this past weekend.

This fictionalized play, written by Arthur Miller about the Salem Witch Trials that took place in the Province of Massachusetts Bay between 1692 and 1693, was co-directed by theater professor Howard Vincent Kurtz and senior theater major Maggie Rodgers.  Kurtz and Rodgers have been working together to produce and direct this play at Mason for three years.

”The Crucible is traditionally done as a seventeenth century historical play,” Kurtz said.  “However, my objective as a costume designer was to portray a more contemporary view, setting the production in the mid-twentieth century.”

“Audience members can expect to see a story about a community that puts everything on the line in search for truth and justice,” Rodgers said.  “Arthur Miller’s play is raw, honest, and inspired by a dark time in American History.”

Through setting the play in mid-twentieth century times, Kurtz and Rodgers hoped to spark discussion on campus about how this story was presented in today’s society.  “I hope that it will make people think about how they, as an individual, act in the world and make them question what they can do to help out their community,” Rodgers said.

Kurtz wanted audience members to glean some valuable learning experiences from the play.  “I hope the audience will see themselves in the characters that are portrayed on stage,” Kurtz said.  “Also, that the choices we make can affect others and have a profound effect on the world.”

Both Kurtz and Rodgers hoped audience members would arrive at Harris Theatre the night of the play with open minds and a willingness to involve themselves in the story.  “I believe attendees should come into the theater with an open mind and heart in order to absorb Arthur Miller’s words,” Rodgers said.

Cast members attended numerous rehearsals in preparation for their October 22 opening night.  “Every actor has a responsibility to one another.  As directors, we guided the ensemble so that they could develop realistic and accessible characters on stage,” Kurtz said.

The rehearsal process was built upon collaboration and communication between the actors, directors and designers. “Like Howard said, it is an ensemble piece and this show wouldn’t be successful without the teamwork and dedication every night from all participants,” said Rodgers.  “We worked very hard each day to create an environment where people felt comfortable to explore and push artistic boundaries in order to tell Arthur Miller’s story.”

Mason students tweeted about their experience: 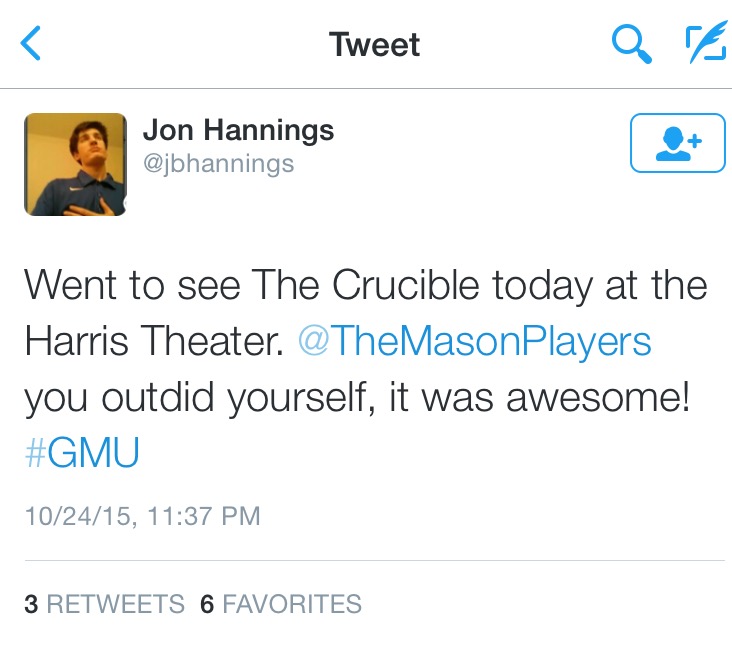 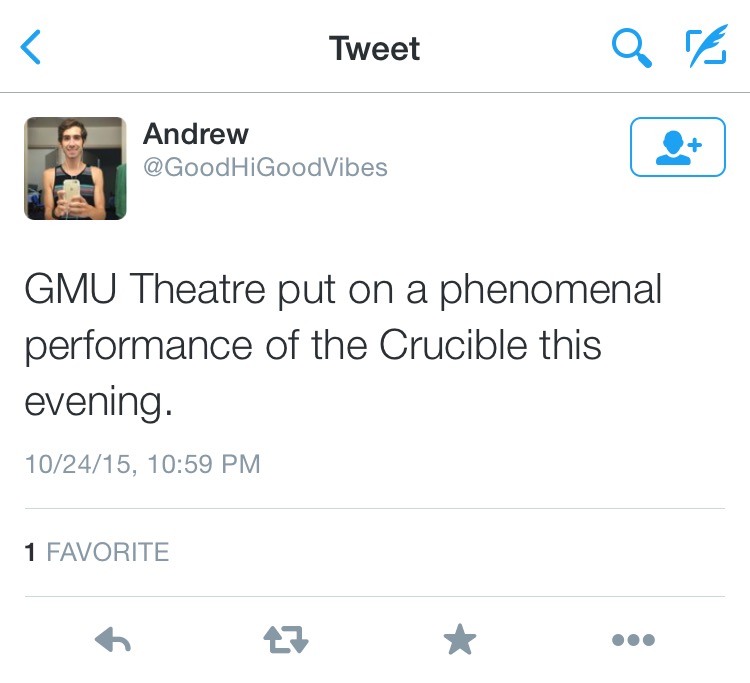 Women’s soccer records a loss and a spot in playoffs