Sexual assault can happen anywhere and anytime, especially on a college campus. It is defined as any physical action or behavior that is not consented.

Tuesday, Sept. 22, students and faculty at Mason came together in Dewberry Hall to raise awareness for sexual assault prevention at the nonprofit Fear2Freedom’s event.  The event emphasized that people affected by sexual assault are not victims, they are survivors.

“I think we are doing better and better every year in bringing people to this event.  This very week we had a new set of data released from the Association of American Universities that published that data.  Once again, one in five, mostly women, when they were asked were at some point a victim of sexual assault,” said President Angel Cabrera.  “And the frustrated (sic) thing about those numbers is that they just haven’t changed in the past seven years. It’s simply unacceptable.” 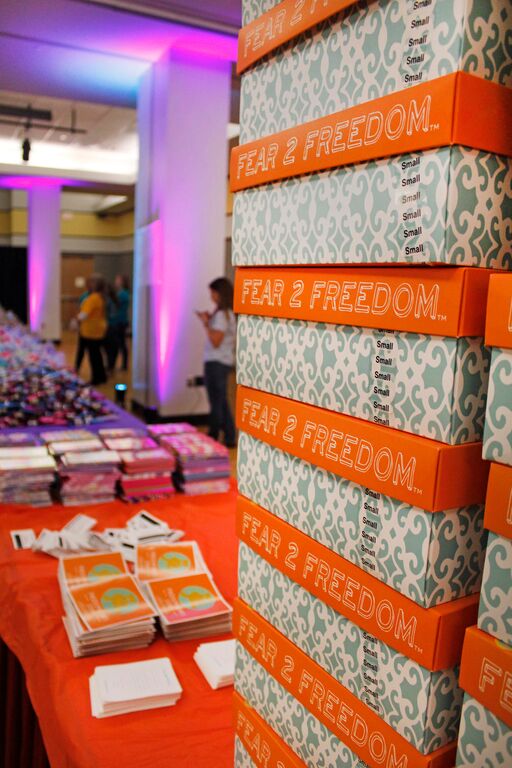 Volunteers at the event assembled Fear2Freedom boxes, which were filled with toiletries, clothing, a teddy bear and a hand-written note with a special message for victims of rape or domestic violence.  The 350 after-care kits went to Inova Health Systems and local hospitals.

The Association of American Universities (AAU) released the results of the campus survey on sexual assault and sexual misconduct September 21.

According to the official website, the goal of this survey was to “provide participating institutions of higher education (IHEs) with information to inform policies to prevent and respond to sexual assault and misconduct.” This study was administered at the end of the spring 2015 semester on 27 IHEs, 26 of which were AAU member universities. The survey was designed to assess the incidence, prevalence and characteristics of incidents of sexual assault and misconduct; the overall campus climate with respect to perceptions of risk; knowledge of resources available to victims and perceived reactions to an incident of sexual assault or misconduct.

One of the survey’s key findings showed that “11.7 percent of student respondents across 27 universities reported experiencing nonconsensual sexual contact by physical force, threats of physical force, or incapacitation since they enrolled at their university.”

Lauren Mattos, coordinator for violence prevention and response at Wellness, Alcohol, and Violence Education and Services (WAVES), shared some thoughts on the subject. “There have been numerous studies conducted nationally about the frequency of campus sexual assault,” said Mattos. “These studies confirm, time and time again what we know. This form of violence is very prevalent on college campuses everywhere. The most recent study shows that one in five college students are sexually assaulted during their time at school. Regardless of the statistical numbers, however, even one sexual assault is too many.”

Mattos commented that sexual assault is something that occurs regularly on our very own campus. “The college environment is very conducive to this form of violence because of the close proximity students have to each other, the availability of alcohol, exposure to new situations, inexperience and lack of education about sexual assault. These factors make students more vulnerable to being victimized.”

She mentioned that another contributor to the prevalence of sexual assault on our campus is that most of Mason’s student body is between 18 and 24 years of age. “Research shows that people between the ages of 16 and 24 have the greatest risk of being sexually assaulted, while the average age of sexual perpetrators is also 16 to 24,” Mattos said.

Another statistic found in the AAU study showed that the incidence of sexual assault and sexual misconduct due to physical force, threats of physical force, or incapacitation among female undergraduate student respondents was 23.1 percent. This included the 10.8 percent of women who experienced penetration.

“I can predict that most assaults happen in the ‘home’ of either the victim or the perpetrator,” said Associate Director of Women and Gender Studies Angela Hattery. “This can range to anything from a residence hall, apartment, or off-campus houses for college students.”

Hattery is another strong advocate for this issue at Mason. Through its Twitter account, the women and gender studies department has been sharing statistics all week to educate followers on the subject.

Mattos added that sexual misconduct can happen anywhere. “They happen at off-campus parties, in residence halls, cars, classrooms, wherever there are students and sexual perpetrators.”

Another statistic released in the AAU study found that just five to 28 percent of sexual assault instances were reported to campus officials or law enforcement.

According to Mattos, the first step after a victim’s assault is to figure out what happened. “When looking at the impacts of trauma it is understandable that victims often do not report,” said Mattos. “There may be pieces of their memory that are not clear which makes it very difficult for them to process the experience much less communicate what happened to someone else.”

Some students may try to deny their experience, a way the human brain protects itself from any further trauma. “Most victims just want to go back to living their lives as if the assault never happened and making a report makes it very real,” Mattos explained and added that students naturally do not feel very comfortable telling strangers about one of the worst moments in their life.

The AAU survey also found many victims did not report incidents because they felt it was not serious enough. According to the survey, other reasons for not reporting were that “they [victims] were ‘embarrassed, ashamed or [thought] that it [reporting assault] would be too emotionally difficult.'” Others did not report assault because “they ‘did not think anything would be done about it.’” Still, more than six in 10 student respondents (63.3 percent) believed that a report of sexual assault or sexual misconduct would not be taken seriously by campus officials.

The women and gender studies department recently piloted its own sexual assault survey that assesses the rates of sexual violence on our campus. The report has yet to be released.  “I can predict that yes, sexual assault likely takes place at Mason at the same rate it does on other campuses, impacting 20-25 percent of the people who identify as women and perhaps 5 percent of those who identify as men,” said Hattery. “I do know that national data tell us that 84 percent of victims were rape[d] someone they know.”

Victims of sexual assault often feel ashamed and are afraid no one will believe them. “They have good reason for this, though only two to eight percent of reported rapes turn out to be false, only about six percent are ever prosecuted, either in the criminal justice system or in a campus conduct process.” said Hattery.

Many victims report being afraid that their parents will find out or state that they are unsure if what happened to them constituted sexual assault.  Some victims fear that they will be blamed for what happened because they engaged in behavior that increased the likelihood of assault, such as drinking at a party or accepting a ride home. Still, Hattery reminds students, “It is important to be clear, no victim is ever responsible nor should they be blamed for the assault.”

Healing mentally and physically from an incident takes time. “Research shows that the reaction of the first person the victim tells about the assault determines what help/support the victim ultimately gets,” said Mattos. “When the reaction is supportive, nonjudgmental and encouraging the victim is more likely to cope in a more healthy way. Conversely, when met with skepticism, anger and/or blame, a victim will often keep the assault a secret and not report or disclose to any one again. That is why, in my experience, a great first step after a sexual assault should be to get help and support from a victim’s advocate like me.”

Advocates are available to talk with victims about their overall safety, reporting options, the medical services available to them, their legal rights, and to assist them with housing and academic accommodations to ensure that students can finish their degrees while dealing with the traumatic situation.

“Advocates can also provide the victim coping strategies that have worked for others and help them develop a support network,” said Mattos. “They can explain trauma and the brain and body’s reaction to it. This comprehensive support can ultimately get sexual assault victims on a path to healing that is meaningful and unique to them. Victim advocates know that every person copes in different ways; they understand that it is essential to give the victim back the control and power over their situation while allowing them to dictate the terms of their healing.”

WAVES is a confidential resource for students on campus, dedicated to providing services to those impacted by situations like sexual assault. The program also offers education and volunteer opportunities for those interested in getting involved in the fight to stop sexual assault.

“Our staff knows that these issues severely impact the lives of those who have been affected and we are dedicated to providing support,” said Mattos. “Our goal is to help student-victims maintain happy, healthy lives so they can reach their goals of completing their degrees and moving forward on their paths to success.”

WAVES does more than help those dealing with recent trauma, however.

“Besides providing direct services to students who have been impacted by sexual violence, a large part of preventing sexual assault on college campuses is through awareness and education,” said Mattos. “WAVES starts this mission out strong every semester with welcome week events like Cookies and Consent.”

The women and gender studies department plans to continue tweeting out sexual violence statistics to raise awareness and to offer a one-credit course in the spring 2016 semester called Healthy Relationships in which sexual assault and dating violence will be discussed. Students can also take the pledge to Eradicate Sexual Violence in the Women and Gender Studies Center, where students sign the pledge and get a free t-shirt.

Here are some of the upcoming events hosted on-campus to further awareness of sexual assault at Mason:

Fall for the Book speakers:

Author Leora Tannebaum will be speaking about her recent book on slut shaming Oct. 1 at 3 p.m. in Research Hall, room 163.

Mason also offers other free and confidential resources.  Counseling and Psychological Services (CAPS) provides counseling to students who have been affected either recently or in the past by incidents of interpersonal violence. Student Health Services (SHS) provides free medical examinations, sexually transmitted infection screening, HIV screening, emergency contraception and confidential support during recovery.