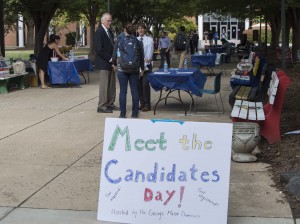 Democratic candidates appeal to Mason students for either election or re-election as part of Meet the Candidates Day. (Alya Nowilaty/Fourth Estate)

November elections are just around the corner, and candidates running for positions in Fairfax City and County are reaching out to Mason students.

On Tuesday, Sept. 22, Mason Votes, George Mason Democrats, RepresentMason and GMU Student Power hosted Meet the Candidates Day, an event where ten democratic candidates running for election or re-election on November 3 came to speak to students and encourage them to vote.

Sophomore Joe Russell, co-president of George Mason Democrats, said Meet the Candidates was created so that the democrats who are running to represent Mason had a chance to meet some of their constituents.

“[We wanted] to bring them on campus and give students the chance to talk with the candidates to actually know the people they’re going to be voting for this November,” Russell said.

Russell continued that some key issues that will be discussed for this election period include tuition prices, Medicaid and infrastructure, specifically road paving, all of which affect Mason students.

Bettina Lawton, running for clerk for court for Fairfax City and County, said transparency and access are the key issues she plans to address in her campaign. She said the inconvenient hours of the courthouse and the tedious process for accessing public documents are problems she would like to fix. Lawton added that it is important for candidates to go out and talk to voters.

“If you go out and talk to people in the community, you can find out what their concerns are and what their needs are. If you’re never out, you never hear, and then you don’t know what needs to be done,” Lawton said.

Another candidate, George Lamb, who is running for Northern Virginia Soil & Water Conservation district board director, said he will be focusing on climate change and Chesapeake Bay preservation. At Tuesday’s event, he stressed the importance of voting.

“This is where the vote starts,” Lamb said. “If [students] don’t learn to vote, [they’re] not going to have the habits to vote in the future.”

Low voter turnout is expected this year as there are no major national or state-wide elections. For some candidates, this was another reason to attend the event, as they wanted to convince students that it is still important to vote in local elections.

Of the candidates who showed up to Campaign 2015, most said they were glad to be reaching out to Mason voters and getting the chance to discuss their concerns one-on-one.

“It really shows the students at Mason that the candidates are willing to come to them,” Russell said. “It shows the significance of George Mason University to our local community and shows how much the local elected officials really do care about coming on campus and coming to talk with students.”

Students registered in Fairfax County can vote at Merten Hall. Polls will be open from 6 a.m. to 7 p.m. Student voters are required to bring a Mason ID. To register to vote, visit www.vote.virginia.gov.

The following candidates running for election came to Meet the Candidates Day:

For more information on the candidates, visit gmudemocrats.com/candidate-information/. To learn about the republicans running for office, visit fairfaxgop.org/2015-elections/.