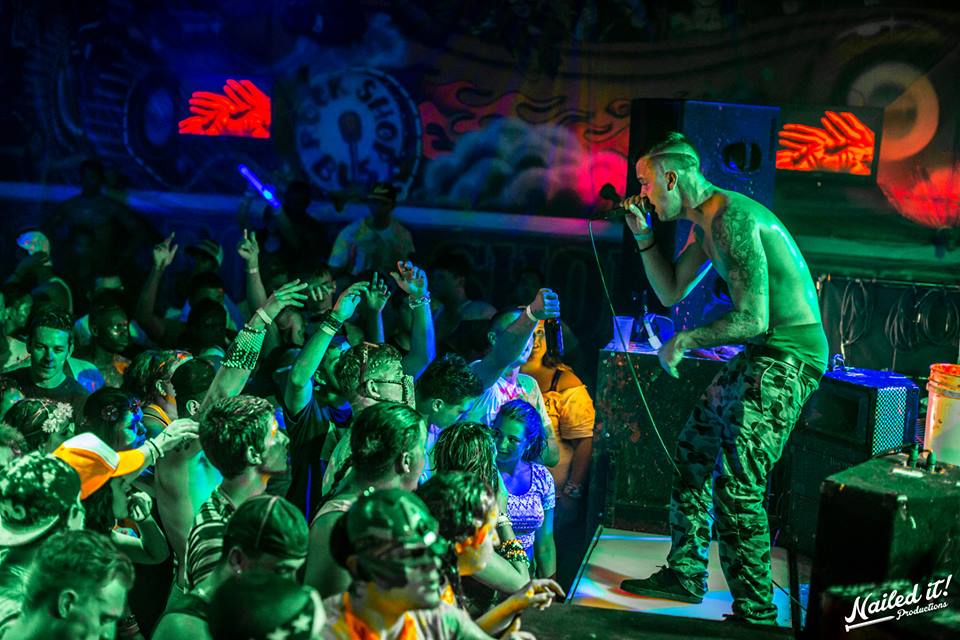 Succeeding as an artist in any music scene requires a perfect storm of talent, connections, hard work, and a little bit of luck.

The local pool of artists swells with a surplus of gifted minds, but most of the small musicians and acts find it difficult to break into any greater circle. The discrepancy between the local scene and greater music industry causes many small acts to fizzle and disband before catching any lucky break. However, some folks find a way to make their own luck. One such individual is Mason student and hip-hop arist Brett Selestay, who operates under the moniker “Bo Jankans.”

Selestay a Herndon native, has stood with his feet firmly rooted in the underground hip-hop scene of D.C., Northern Virginia, and Maryland for many years. Countless venues across the area have played host to a Bo Jankans show. Alongside his longtime co-conspirator and frequent collaborator DJ Ragz (Brian Ragonese), Selestia spearheads a brimming league of talented local artists. A noteworthy amount of success has already graced Selestay’s still-growing résumé.

“I’ve always loved music,” said Selestay. “As a young kid, I was introduced to doo-wop and soul from the sixties, and that music was, and still is, really important to me.”

Motown-era classics grounded the young Selestia’s breadth of musical knowledge. The expansive world of hip-hop, however, was right around the corner.

“I knew a lot of the big, popular hip-hop artists at the time,” Selestay said. “But when I was around 13 or so, I got introduced to [revered underground hip-hop artist] Atmosphere and his crew from Minnesota. Once I got into a few more other underground artists, it was like a whole other world of hip-hop. That was when I really started to write and practice as an MC.”

That particular brand of hip-hop’s near-limitless levels of lyrical ability and high-energy beats inspired Selestay to his core.

“These artists made me feel that I could be a part of that scene,” said Selestay.  “These were the people that made me feel like ‘you can do that.’ They really changed my life.”

After honing his craft, Selestay teamed up with DJ Ragz and busted out live shows across the entire D.C. metropolitan area. Bo Jankans generated a lot of buzz around the scene, eventually breaking out to dabble in other regions along the east coast.

“It wasn’t until we started getting out of the area that people back home started trying to get something working with us,” Selestay said. “We got invited to play the Herndon Festival, which is actually the largest outdoor music festival in Northern Virginia, and we’ve played the past four years there. We even got invited onto the USS Harry S. Truman to play for six thousand sailors in the Navy.”

Those hefty local opportunities garnered attention from larger groups with even greater spheres of influence.

“After getting some of those shows in we actually got the opportunity to open up for [Wu-Tang Clan members] Raekwon and Ghostface Killah and a few other big hitters,” said Selestay.  “It all snowballed from us just getting out there and working. We could play a show for ten people every night, and we wouldn’t care. We’d just rock as hard as we could. Next thing you know we’re playing for hundreds, even thousands, of people.”

The growing amount of support from fans and artists along the east coast and beyond has opened the door for Selestay and his close-knit team of collaborators. Such levels of success and the potential for even greater accomplishments have not neglected the music scene at home. In fact, the drive to succeed inspires him to help make the community better.

“I think that this region has an unbelievable amount of talent,” said Selestay. “For people to say that music, especially hip-hop, is on the decline around here? They couldn’t be more wrong. Hip-hop, and I’m sure other genres, is at the best it’s been in a very, very long time. The scene just needs to come together.”

In a collection of talented artists, each vying for their own personal success, so often the sense of community is abandoned. Selestay believes this should never be the case.

“People have got to put their egos in check,” Selestay said. “Everybody wants to be considered the top dog in this area. But people need to stop concerning themselves with titles and start working as a team. There’s strength in numbers.”

The issue is so frequently recognized, but people in the scene rarely conjure any conceivable solution to the lack of interconnectivity and collaboration among artists. Selestay proposes where changes can be made:

“To compare to Atmosphere, that guy selflessly put a bunch of people onto his label and made friends with them instead of competing. We need to eliminate that feeling of necessary competition around here. There should be intermixing genres at shows. We should be able to see five different genres at one show. It should be a showcase of talent. You’ve got fans, I’ve got fans. Why can’t they be everybody’s fans?”

For the future, Bo Jankans and DJ Ragz have gone back to the drawing board to bring new material to a polished live atmosphere. After performing nearly 40 shows last year, Selestay expresses an interesting new approach to performing.

“[DJ Ragz and I] are working with the producer named Unown,” said Selestay. “We’re trying to bring back street performance as a legitimate way to get your music known. We’ll be travelling around the east coast, trying to deliver a refined, reheard, a polished set to any street corner. We’re thinking something guerilla roots, physically presenting the product to people’s faces. We’re calling it something like the ‘Battery Pack Crew.’”

At any Bo Jankans show, the crowd is as diverse as the performers. The positivity in motion courses through every person’s soul. It takes revolutionary thinking and confident action to ensure any sense of longevity and change in a community. Selestay and his camp possess all the necessary features and more to be a progressive force in the music scene. The future of hip-hop music, and by extension the entire music scene, in northern Virginia looks bright and primed for an influx of influence. The potential for this region is not lost of Selestay, and the message is simple.

“Treat everyone better,” said Selestay. “Be more civil. This area could be a huge breeding ground for talent – it already is. Capitalize on that.”