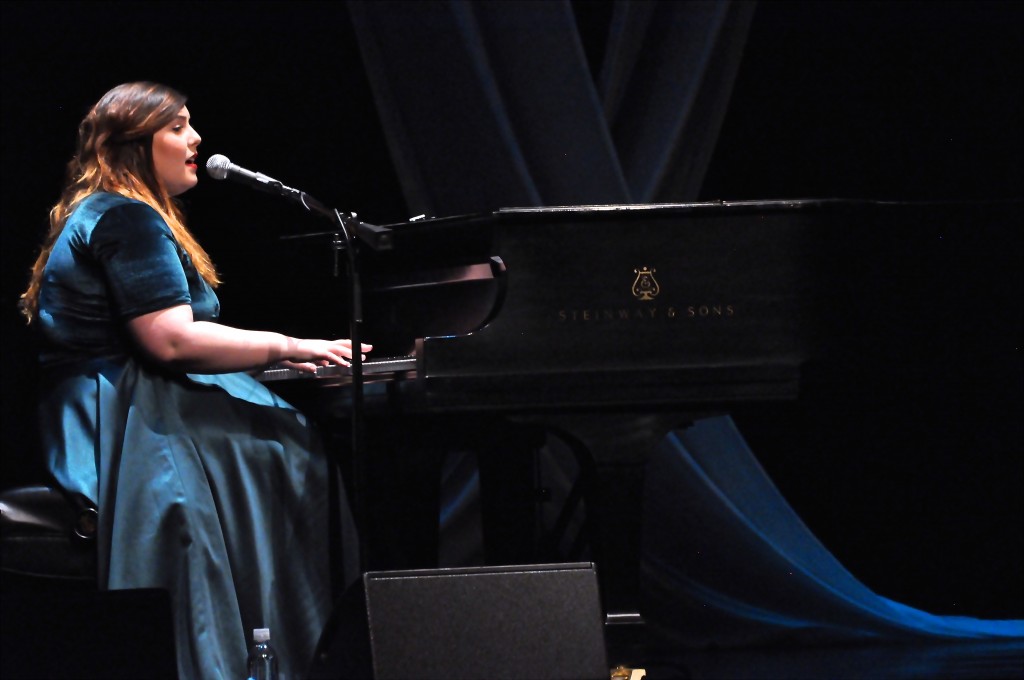 Mary Lambert performed last night at the Center for the Arts. Photo by Johannah Tubalado.

It has been over two years since singer-songwriter Mary Lambert’s collaboration with Macklemore and Ryan Lewis was released. The song “Same Love” quickly hit double platinum in the United States. With the release, Lambert’s life completely changed from her small town Everett, Washington lifestyle.

Lambert worked as brunch waitress and bartender when she got asked by the duo to write the hook for the song.

“There are two ways to think about it, I guess my career, professional life and also my personal life because it’s an entirely different realm. There’s so many more opportunities. I’m not broke anymore,” Lambert said. “More than anything, I get to be a full time artist and that is something that I’m proud of. [It is something] That I hope I would have chosen in my life time. I am honored, it’s a to privilege be a full time artist. I’m grateful for that.”

The popularity of “Same Love” was immense. Lambert was doing small performances around the same time the song was released and as the song grew in popularity so did Lambert’s following. About a year later, Lambert released an extension of “Same Love” into her own song called “She Keeps Me Warm” for her album.

“People came to the show hoping that I’d do ‘Same Love’ and I don’t sing to a track and I don’t rap very well yet. I felt like I wanted to give people something,” Lambert said. At first, she didn’t want to release the song.

“I didn’t want to beat a dead horse,” Lambert said.  “Then I realized, as a seventeen year old, I would have loved to hear a song like that on the radio.”

Lambert, who is openly gay herself, felt that a young female going through the same experiences as her, would think ‘how cool is that! I’ve never heard that on the radio before.’ The message behind the song is what made her feel that it was important to release it and sing it at her shows.

The music video for “She Keeps Me Warm,” is something that Lambert is extremely proud of.

“It was sort of this brain-child I had since I was seventeen,” Lambert said. “I remember just seeing Taylor Swift videos in college and seeing all these amazing love story videos. I scoured the internet for the out-artists I knew, and there was never a love story the same way that a lot of top 40 straight artists were making.”

Lambert felt that there wasn’t an honest depiction of what a lesbian couple looked like. Videos objectifying lesbian relationships started popping up on the web.

“You know, two girls rolling around in lingerie and making out is not a typical lesbian relationship,” Lambert said, “I wanted something that reflected my life and my community.”

Even with that in mind, Lambert feels LGBTQ movement in the U.S. is on a positive trend.

“I think we are on an upward slope, for sure,” Lambert said. “It feels pretty great as an out- artist to have had success. It is becoming easier for gay artists to be out within their field, well I don’t know if easy, but common.”

In Lambert’s music and spoken word, she is fearless in the fact that she writes a lot about her past personal experiences in rape, abuse, and body sensitivity. Her interviews often feature questions about these darker times in her past and she is very open with discussing them.

“I don’t really know any other way to be,” she said about being so open with her life. She admits that she has always been a vulnerable person. “That is how you achieve empathy and empathy is the key to connection. To me, being vulnerable is really just about human connection and that’s what I care the most about.”

Lambert has even mentioned in an interview before, that some of her fans know her better than her co-workers ever did.

It makes sense then that her favorite song to perform live is “Body Love,” which conveys the message the name implies. Lambert wrote it about six years ago and for about four years she has been performing it every night at her shows.

“It never gets old for me, I always find something new or empowering, or a different way to say something,” Lambert said. “It’s just something really gratifying to perform every night.”

Lambert would say that her singer-songwriter mother is her musical influence.

“Growing up around her really channeling her emotions into her music, taught me that writing and music is a great solution to channeling emotional energy,” she said.

Another big musical inspiration for her, Jewel, was also her very first album purchase.

“It was her Spirit album,” Lambert said. “And then I bought all the other albums after that.”

She also grew up listening to other strong song writers like James Taylor, Tracie Chapman, Carol King and Fleetwood Mac.

Graduating with a Bachelor’s of Music in Composition at Seattle’s Cornish College of Arts in Seattle in 2007 really made an impact on Lambert’s musical life.

“I wrote a lot of classical music,” she said. In the current musical scene, Lambert would say she loves hip hop, specifically noting Frank Ocean’s music and D’Angelo’s new album.

She is very active on social media, tweeting often. A recent tweet of hers mentioned getting her cello fixed. Lambert is musically talented, she is able to play piano and taught herself how to play guitar at the age of ten.

“I’ve played cello for about seven years. I have never had formal training; I was just in orchestra class. I want to get my chops back!” Lambert said. Lambert is looking forward to taking lessons again and finding ways to incorporate the cello into her upcoming shows.

Being on the road all the time, weird things are bound to happen. Lambert shared one of her funniest moments while on tour.

“I did this show in Florida,” Lambert said. “I was in the first song, and these girls just started having sex! Like pants were coming off, I don’t know what was going on. So security came and they [the girls] were on top of each other in the front row. It was like a seated theater venue.”

About two years ago she released a poetry book called, 500 Tips for Fat Girls.

“That was a collection of writing spanning about six years,” Lambert said. “I always like to tell people as a disclaimer that it is definitely not a self-help book.”

The book goes over many issues in Lambert’s life. It’s about rape, incest, bi-polarity, body image, and homosexuality. She wrote this book in her late teens and early twenties. She shared that she is actually working on a second book right now.

Lambert writes and sings inspirational music. She likes to promote a “love yourself” type of lifestyle.

“There is no right way to love yourself. Loving yourself is a practice, being accepting of yourself is a practice. If you don’t get it right, right away, it’s okay,” she said. She even admits that she is still working on it, herself. “It’s important to treat yourself as if you were a child. If a baby is learning how to walk and it doesn’t get it right away, you don’t say ‘fuck you baby, learn how to walk better!’ You are gentle with the baby because it takes time to learn anything. Self-care is a practice. The same way a baby would need really kind people around them, it is really important to have a positive support system [around you].”

At shows, she is able to connect with fans through her music and vulnerability.

“The shows are somewhat, me extending a hand, saying I see you. Because look at me, I’m human. I’ve got baggage and we are all battling something,” she said. Lambert wants her fans to know that “we are all in this together, and you aren’t alone.”