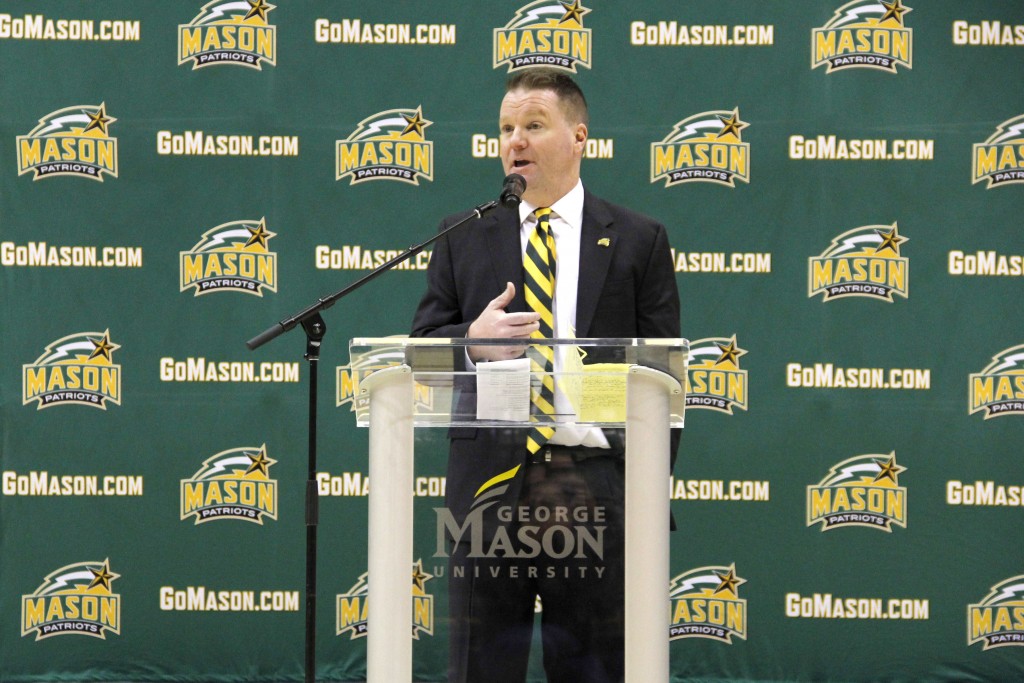 Dave Paulsen speaking in front of a small crowd in the Patriot Center at his introductory press conference on Wednesday, April 1. (Amy Rose / Fourth Estate)

The man newly tasked with leading George Mason basketball seemed to go through a range of emotions in his introductory press conference.

When talking about the transitions facing his own career and family Dave Paulsen almost choked up when giving thanks to his wife and family for their support of his 21-year ongoing coaching career, his nerves showed when he was on the podium as his left hand was firmly in his pocket for almost the duration of his remarks but Paulsen showed the confidence and charisma that impressed Mason officials to select him for the job when speaking about his vision for bringing a successful basketball culture to Mason.

Paulsen was formally introduced Wednesday as the 10th head coach in Mason basketball history, after the school’s announcement on Monday, in front of a small crowd of fans, staples of basketball game days like the Green Machine and with some of the returning players in attendance.  It was his message to the latter group that Paulsen echoed throughout the press conference.

“You didn’t choose me, but I chose you. And I chose you because of your potential, because of your ability and because we’re going to build great things together,” Paulsen said. “There’s going to be some bumps in the road — transitions are hard — but there’s great character, there’s great potential, there’s great resolve here. And we’re going to work together to put a team on the court that Mason Nation is proud of, to put a team in the classroom that Mason Nation is proud of and to be a team in the community that can galvanize this campus once again.”

The message to rally his new team is important as the Patriots have only two outgoing seniors in guards Corey Edwards and Vaughn Gray. Edwards was the team’s shooting guard for the majority of the season, so a large portion of the core of the Mason team that finished 9-22 this season will remain in tact, barring any transfers.

Paulsen’s hiring came after multiple reports on Sunday that Mason had University of California, Irvine coach Russell Turner tabbed as the next coach — even going as far to make Turner the initial offer before he turned it down.

Turning around this Mason team immediately will be an uphill battle following back-to-back 20-loss seasons, but President Ángel Cabrera, who gave the opening remarks at the press conference, stressed the vitality of a successful basketball team for the university as a whole now and in the future.