Mason’s faculty senate requested information about the funding given to the athletics department in a polarizing resolution passed Feb. 4, a move that reflects ongoing concerns about the university’s tightening budget.

Introduced by the senate’s executive committee, the resolution asked for information about the costs incurred and revenue generated by varsity sports, attendance at athletic events, how overall costs have changed over time and the amount of student subsidies used by the athletics department. 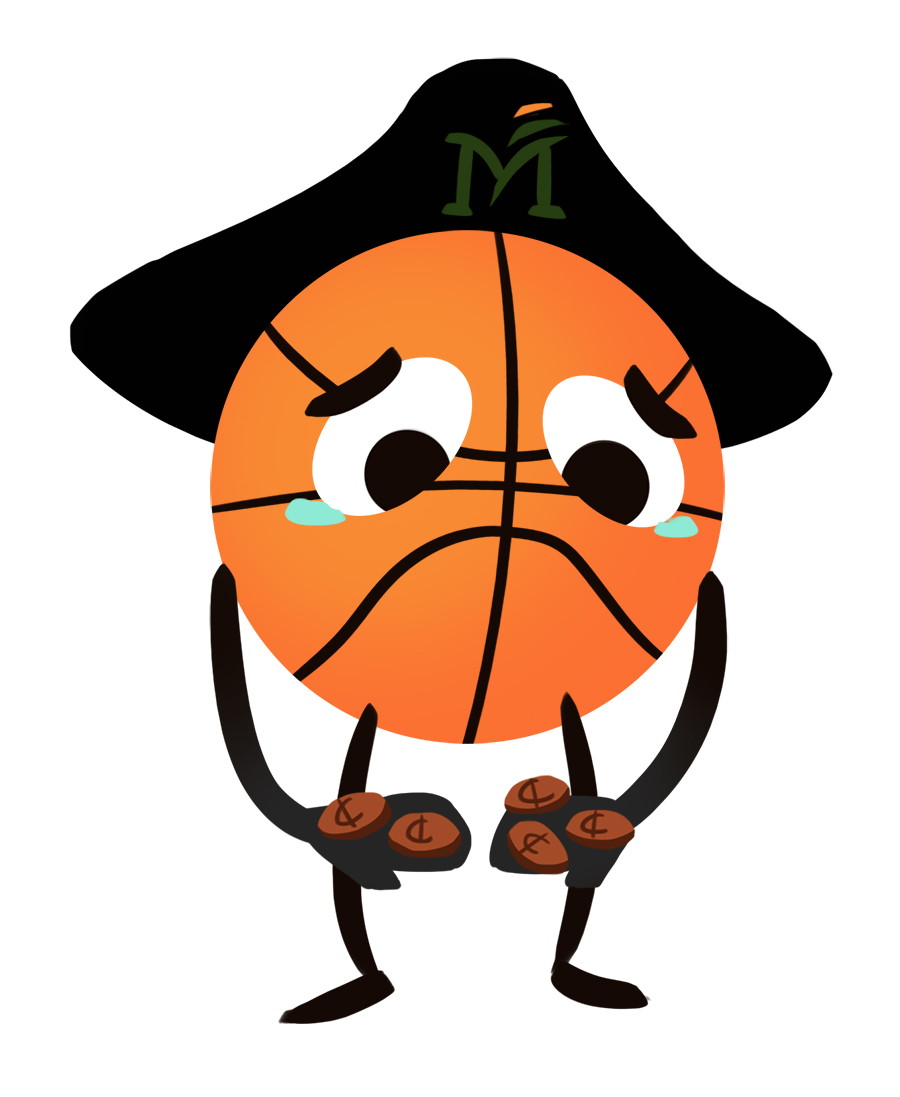 The gathered information would then become the “basis for a constructive dialogue between the central administration and the faculty senate regarding spending priorities of varsity sports and instructional activities at the university,” according to a version of the resolution published online as part of the agenda for the senate’s Feb. 4 meeting.

At the heart of the resolution lies uncertainty over how student fees are used by the athletics department, raising questions about the importance of athletics to the general student population and the role that sports play at Mason.

“Students are walking out of here with tens of thousands of dollars in student loan debt,” Dr. James Bennett, an economics professor and the executive committee member who wrote the resolution, said. “We have this relatively small group, relative to 35,000 total students, who are being subsidized heavily by students…The athletic events don’t even begin to pay any of the expenses.”

Rather than getting state revenue, Mason’s athletics department is funded by a combination of self-generated revenue — which includes ticket sales, sponsorships and money raised through donors — and student fees allocated by the university that cover food and housing for student athletes as well as salaries for coaches, administrators and the department’s support staff. Student fees make up around 70 to 74 percent of the department’s overall budget, according to Ron Shayka, the senior associate athletic director for finance and operations.

According to the 2014-2015 Budget Executive Summary released by the Office of Budget and Planning, intercollegiate athletics, which is listed as an auxiliary enterprise along with housing and residential life, campus access and transportation and other services, gets $14.5 million from student fees. Including $4.4 million from user fees, intercollegiate athletics has a total revenue of $18.9 million.

The executive summary also cites a $294,000 increase in student fees for student athletic programs in 2015. Student fees will increase this fiscal year by $5 million overall to cover support for financial aid, healthcare and pension increases, and increased debt on student fee-supported facilities, among several other listed areas.

The athletics department only includes intercollegiate or varsity athletics, so costs and revenue numbers for Mason’s club and intramural sports programs, which are funded through university life, are not included.

Bennett says his interest in the financial status of the athletics department was piqued by a Jan. 23 story in The Washington Post titled ‘What Happened to George Mason Basketball?’

In examining the men’s basketball team’s struggles in finding success following its 2006 Final Four run, the article touches on declining attendance at games, which averaged 3,513 through this season’s first eight home games, a figure that does not take into account the many games that have taken place since then. According to Maureen Nasser, the associate athletic director for communications, men’s basketball games averaged 4,916 people during the 2013-14 season.

“If there was a huge, huge turnout at every athletic event, that would be different,” Bennett said, “but why are students paying hundreds and hundreds of dollars every year, when very few people [attend the events]?”

The Washington Post article also mentions a number of potential changes designed to improve the athletic program, including major renovations to the Patriot Center or even the construction of a new on-campus arena, an increase in charter flights, improvements to team facilities and support systems and selling the Patriot Center naming rights.

“We recognize that athletics, principally basketball for us, is a marketing opportunity for the institution,” Athletic Director Brad Edwards said in the Washington Post article, estimating that Mason, which joined the Atlantic 10 in 2013, is eighth or ninth in spending among the 14 teams in its conference.

According to a 2014 report compiled by USA Today based on revenue and expense data for the 2012-13 school year, the Mason athletic department’s total revenue was $22.3 million, putting it at  no. 110 out of the 230 NCAA Division I public schools that released data. It came in at no. 109 in terms of total expenses with $22.1 million. In both cases, Mason was lower than Virginia Commonwealth University, which was ranked at no. 95, but higher than the no. 113-ranked College of William and Mary.

The presence of a football program has a significant impact on a university’s revenue and expenses, according to Shayka. While football schools spend much more, they also receive more money through media rights agreements and TV contracts.

For example, the University of Maryland ranks no. 47 in revenue with $63.7 million and no. 48 in expenses with $63.3 million. Recent NCAA autonomy rule changes have allowed schools in the elite Big 5 conferences, which includes Maryland’s Big 10 conference, to offer scholarships covering a student athlete’s full cost of attendance, making those schools more attractive to potential recruits.

According to a Jan. 18 NCAA article explaining the rule changes, the full cost of attendance scholarships would cover expenses like transportation and academic supplies, in addition to tuition, fees, room and board and books, which are covered in the standard full scholarships offered by schools like Mason.

“You’re really seeing a separation at the top of those schools in their ability financially to separate from the rest of us,” Shayka said. “It’s not like we don’t have the ability to try and keep up with all or some of it, but without the television revenue, it will be nearly impossible.”

Bennett says that he is concerned about these proposals because they come after Mason has experienced a series of budget cuts by the state, making it more difficult to pay faculty salaries and stalling needed upgrades to buildings and classrooms.

“It just seems to me that we need to ask ourselves, what is our mission as a university?” Bennett said. “Is it to support a small group of varsity athletes who jet all over the country and have tutors and scholarships and so on, or is to educate the Mason students? What are our priorities?”

However, some faculty senate members say that the athletic department has been unfairly singled out by this resolution.

An email sent to senate members from the School of Recreation, Health, and Tourism faculty says that “the executive committee’s resolution is unnecessarily mean-spirited and accusatory. The language used is akin to a ‘witch hunt,’” referring primarily to a clause in the resolution that concluded that “non-varsity students are ‘taxed’ to provide special benefits to a relatively small and elite group of varsity athletes.” That clause was eventually eliminated before the senate passed the final resolution.

“Everybody has a right to ask for information, so I was more opposed to how it was done,” Dr. Dominique Banville, the director of the division of health and human performance, said. “We all felt that the whereas’s were unnecessary, were biased negatively toward athletics and we didn’t feel that it was a productive way of operating.”

Banville and Pierre Rodgers, who is the academic program co-coordinator for sport and recreation studies, wrote the email sent to the senate on behalf of their colleagues.

Though the School of Recreation, Health, and Tourism operates independently from the athletics department, they sometimes collaborate through the athletic training and sports management programs, and many students and employees are involved in both departments.

Banville and Rodgers said that focusing solely on the financial aspects of the athletics department and painting it as a program that supports a few athletes at the expense of the general student population ignores the ways that sports can benefit a university as a whole. They mentioned the potential a good athletics program has to raise an institution’s national profile and create a sense of community not just for on-campus students, but also between Mason and the surrounding Fairfax area.

“You can’t deny that there are students, student athletes who, because of knowing about a school’s athletic prowess, they now have recognition about that university,” Rodgers said.

The men’s basketball team’s appearance in the Final Four showed how a successful athletics program can help raise a university’s profile.

“Something that galvanizes the institution in the way that I saw the athletic program do in 2006 is pretty special,” said Linda Miller, the faculty senate’s athletic representative and chair of the athletic council. “I had high school friends who I had been telling I taught at George Mason for 30 years, who had never been to Virginia, and they see that Cinderella run and they go, ‘Now we know where George Mason is!’”

Shayka says that the potential changes mentioned in the Washington Post article are all being considered as ways to improve attendance and recruitment, though ultimately, winning teams are a bigger draw than a renovated stadium, for example, could ever be.

“There’s kind of a cycle of success that we use in trying to determine how all of these things tie together,” Shayka said. “You start saying, ‘Well, how do you recruit better people? How do you improve that product?’ Sometimes you have to look at the infrastructure of the program.”

For instance, he said that while chartered flights may be more expensive than commercial ones, they would cut down on travel time and, as a result, missed class time for athletes. Less demanding travel time, not to mention an improved environment and amenities, could, in turn, make Mason a more attractive option to potential recruits.

In addition to student fees and revenue from ticket sales, the athletics department generates money through the Patriot Club, a non-profit booster club that raises outside funds primarily for student-athlete scholarships, and by attracting corporate sponsors that contribute money in exchange for various kinds of advertising, from placement in a game program to lit signage in the Patriot Center.

Decreasing state funds means that the university has to rely more on other methods of acquiring funds, like raising tuition and student fees. It also places more pressure on the fundraising abilities of programs like the athletics department.

“Fiscal accountability is important,” Shayka said, adding that the faculty senate’s concerns about how programs like varsity sports are financed do not surprise him. “I think everybody is taking a look at how university dollars are spent.”

Miller said that Mason does not have as much flexibility in being able to determine how it wants to allocate state funds as some faculty members may think. Because she also serves as the senior associate dean for academic affairs and student advancement, Miller participates in budget meetings that have given her an understanding of how the university operates on a financial level.

“There are certain funds that come from the state that have to be applied into a certain pot, certain revenues to certain accounts,” Miller said.

In other words, funding for the athletics department and other auxiliary programs, which do not receive any state revenue, does not always directly affect funding for academic expenses like faculty salaries and classroom building maintenance, which comes out of the education and general budget.

“It’s actually a very complicated budget picture,” Miller said. “We aren’t getting the money from the state that we used to get, end of story.”

Get A Date: Connor and Saranya