May is just around the corner and that means graduation season will soon be here but instead of feeling excited, some students have become concerned about the amount they are spending to celebrate their big day.

“Buying a cap and gown doesn’t seem that expensive, but when you add in the costs of a class ring, announcements, a diploma frame, and a graduation party, the amount really adds up,” says senior spanish major Julia Callan. “It’s really expensive and not everyone can afford to buy all those things.” 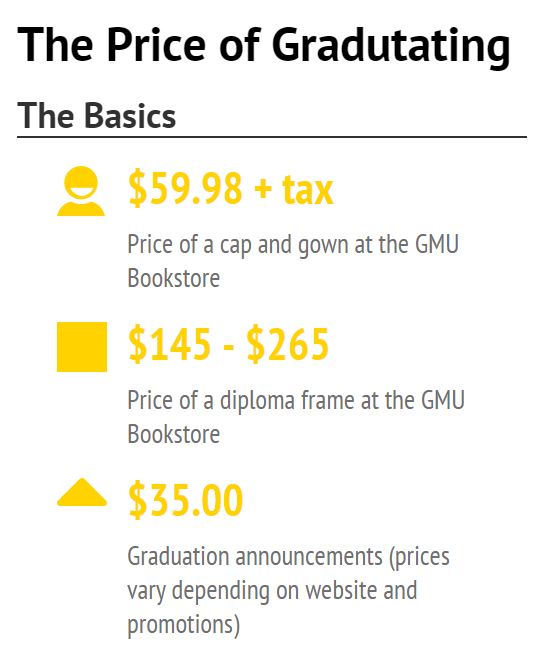 The most important and necessary purchase students will make is the cap and gown at $59.98 plus tax. Other purchases that are popular when graduating are class rings, graduation announcements and diploma frames. Mason offers class rings through Herff Jones ranging from $434 – to- $474 for women and  $434 – to – $500 for men. It all depends on the size and additional features of the ring.

“I believe that we aren’t really getting a bulk discount on the cap and gown and things such as announcements and diploma frames because we are all ordering separately,” says senior accounting major Zarah Miaral. “If it was part of our tuition costs, and we could just enter our sizes and preferences, I feel like the costs could be significantly brought down.”

For a diploma frame, students have the option of ordering one through Mason or finding one in a number of different stores.

The price for a frame or 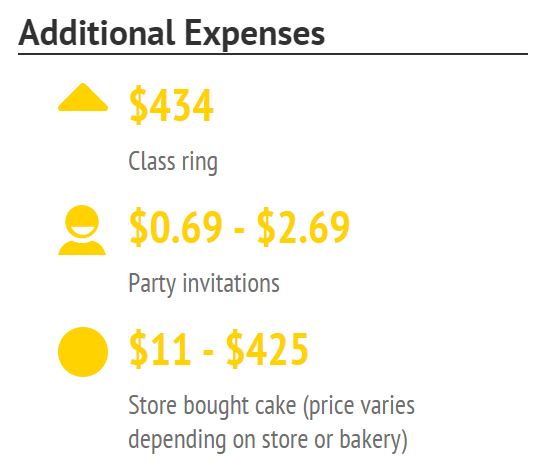 “[I think] the frames, announcements, rings, and other items could be sold in a bundle for a cheaper price,” said senior integrated studies major Michelle Freman. “[There] could [even] be a raffle for a free frame, or cheaper cords from all the different clubs [or] organizations.”

Another popular graduation expense is a graduation party. Decorations and food are usually involved when throwing a graduation party, however they vary enormously in price based on where you go and what you get. Similarly to announcements, you can order party invitations online or buy them in a store. The price to buy them online from Hallmark ranges from $0.69-$2.69 per card.

When buying a cake, the price can vary a lot depending on size, if it’s homemade, if it’s cupcakes, etc. A store bought cake from Wegmans costs between $11 – to – 27, but a bakery made cake will often be much more expensive. For example, at Creative Cakes in D.C., a cake costs between $50 and $425.

“[Graduation is too expensive] considering how much money we are paying for lab fees, books and software purchases,” said senior systems engineering major Sezen Acur. “[Not to mention] housing and tuition [which] costs even an in-state student over $20,000.”

While the cost of graduation can seem like an enormous price when adding all these numbers up, there are ways to keep the price down and still have the party you been hoping for. For example, aside from the cap and gown, many purchases for graduation are not mandatory like party invitations, but Callan and senior Sarah Moss have come up with good ideas on how to keep the cost down.

“Organization like fraternal groups and clubs should pay for stoles in bulk. It’s cheaper that way and everyone will have matching stoles and not a random collection of them,” Callan said. “Another idea is to buy electronic announcements because they are cheaper that way.”

“I think it may be beneficial to some students if a cap and gown rental service was available,” said Moss, a tourism and events management major. “Since it is a service, there has to be some charge, but reducing the cost by even half would allow more to participate in the celebration.”