With graduation just over the horizon, Mason prepares to announce its commencement speaker for the spring 2015 graduating class who will likely be announced soon after the Board of Visitors meeting on Wednesday, March 25.

This is a responsibility that the university takes very seriously, according to Vice President for Communications and Marketing, Renell Wynn. In fact, the final decision is made by President Angel Cabrera himself. Wynn said that the commencement speaker is a chance for Mason to show what it stands for as an institution.

“For many students who are graduating, although they may not always remember their commencement speaker, it’s a great opportunity to hear words of wisdom, especially from individuals who have achieved much in their careers,” Wynn said.

Before Cabrera makes his choice, a team hand-picked by the president and his staff assembles to develop a shortlist of candidates. The team contains a wide range of people, from student representatives to executives of offices like University Life and Board of Visitors members, who do extensive research on each potential speaker. According to Wynn, the most important qualification is that the speaker represents what the university values.

“We want an individual who understands the importance of higher education… We value diversity, so we want to make sure we are putting people in front who share that value but also represent various diverse groups, diverse perspectives,” Wynn said.

Unlike some universities, Mason does not pay its commencement speakers or find them through speakers’ bureaus. Instead, the vetting team relies on relationships with alumni, board members and university associates for recommendations and access to prominent figures.

It also gathers feedback from graduate and undergraduate groups, such as Student Government, as well as the Board of Visitors.

Once chosen, the speaker works with Mason’s team to fine-tune their speech. Wynn said that all the commencement speakers she’s met have been willing to share their speech in advance. 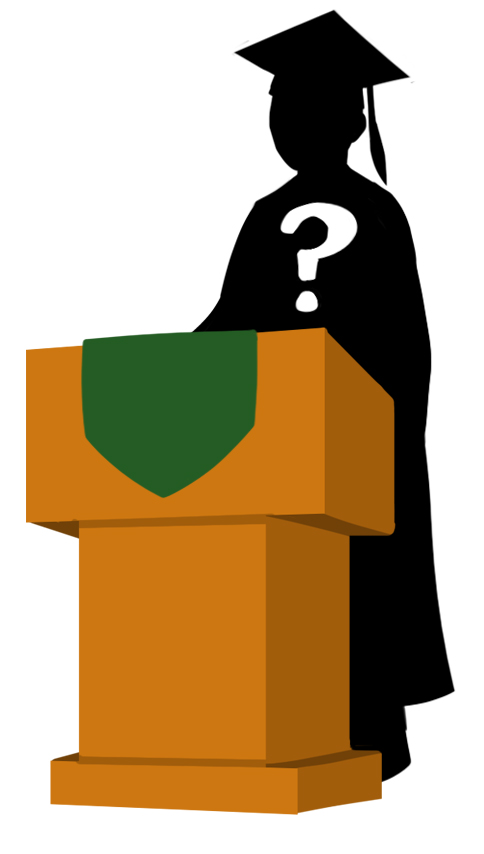 In addition to the outside speaker, Mason enlists a student speaker. The tradition was launched by University Life in 1997 as an attempt to convey a more relatable perspective to the graduating class.

Former associate director of the forensics program, Sheryl Friedley, said how Mason is diverse because its students have various majors and are from different parts of the country and the world.

Friedley instituted a “special topics” course in 1999 along with sociology professor and former vice president for University Life, Karen Rosenblum, to prepare students interested in speaking at commencement. Titled Communication 399: Special Occasion Speaking, the class teaches students how to write and present speeches for a variety of events, such as business conventions, weddings and funerals.

The last month of the semester is dedicated to designing a commencement speech. For their final exam, students are required to present their speeches to a committee of about ten faculty members and other individuals in the oratory field, including past commencement speakers. The person with the highest score has the option of speaking at commencement.

Assistant Director of Forensics and Special Occasion Speaking professor, Jeremy Hodgson, said that the committee is looking for well-structured speeches.

“It is a speech that most people outside of the class tend to think is about themselves, but it isn’t,” Hodgson said. “The speech is actually very much about the graduating class, in this case of 2015.”

Hodgson reviews all submitted speeches before sending them to the committee. Students do not have to take the special occasion speaking class in order to qualify for the speaker role, though it is encouraged because the committee looks for someone with experience.

“Even if you have none [experience] at all, it doesn’t mean we’re not accepting great writers, because sometimes Mason has brilliant writers and not presenters, and part of my job is to turn them into both,” Hodgson said.

Initially, University Life held an open competition to select the student speaker. Besides serving on the judging panel, Friedley spent a week mentoring the winner, giving advice on how to speak in a setting as demanding as commencement.

“They had things they would like to share and tell, but they didn’t have experience or training in how to write about it or how to speak about it,” Friedley said. “And we thought, gee, for students who might be interested in developing those skills, there was certainly an opportunity to give them the chance to develop [them].”

Auditions take place on April 16 at 4:30 p.m., and the student speaker will be officially announced later that night.

Beyond the commencement’s practical function of helping to elevate Mason’s profile and reputation, it is a prime opportunity to celebrate community accomplishments and provide students with a sense of emotional closure. According to Rosemblum, this event shows the importance of recognizing major accomplishments and transitions, for both students and their families.

Fresh life in a ghost town