For George Takei, speaking at George Mason University was like any other event. But with a wide grin and a flashy red tie, Takei is ready to put a humorous spin on anything. 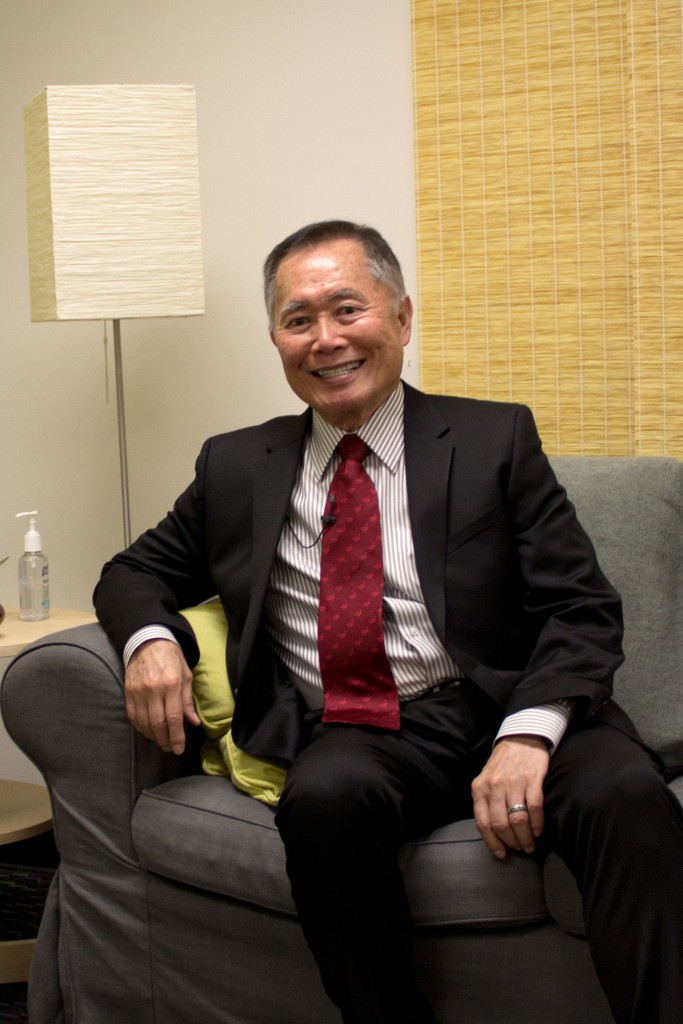 George Takei flashes his notorious smile in the green room of the Center for the Arts where he spoke on Feb. 23 for “An Evening with George Takei.”
Photo Credit: Amy Rose

“I heard about the George Mason University. I always had this itching curiosity about what it was like and I knew the people here would be fascinating and interesting people to talk with,” Takei says jokingly. “So I asked my agent to please book me for this engagement. How’s that?”

It’s this humor and sarcasm that attract Takei’s more than 8 million Facebook followers and over 1 million on Twitter, including many young people who have found a love for the now 77 year old actor.

“In part, it’s my having done Star Trek back in the 60s when many of those people weren’t around,” Takei explains of his young fans. “[They’re] actually the generation that could be the grandchildren of the original “Star Trek” fans, but the thing is “Star Trek” fans, original fans, were very very dedicated geeks and nerds and their children shared that passion with their parents and now it seems to have transferred to that grand-children generation.”

Audience members, old and young, cheered as Takei strutted on the Center for the Arts stage last night, barring his teeth in a giant smile. Hands flew up with the infamous Vulcan salute, four fingers held up with a space between the middle and ring fingers, a symbol now synonymous with “Star Trek”.

“Live long and prosper,” Takei shouts into the audience.

Takei starred in the original “Star Trek” series as Hikaru Sulu where he first gained recognition and became part of the international phenomenon that is the “Star Trek” franchise. The show broke barriers on many levels, including airing the first interracial kiss on television between William Shatner’s Captain Kirk and Nichelle Nichol’s Nyota Uhura.

The third “Star Trek” reboot film, starring Chris Pine as Captain Kirk and John Cho as Mr.Sulu, is expected for release in summer 2016. Takei enjoys the films, but says the social commentary that was heavily used in the original series is missing. According to Takei, the creator of “Star Trek” liked to use science fiction as a metaphor to handle issues like the Vietnam War and the civil rights movement.

“The last two “Star Trek” movies, and there’s a third one coming up, they’d been […] good space operas and that’s what it was, it didn’t go quite beyond that and we have a lot of issues of our day that lends itself to metaphorical commentary,” Takei said.

Social activism has always been a part of Takei’s work. After spending part of his childhood in a Japanese-American internment camp in Arkansas, Takei has worked tirelessly for the recognition of these camps and what they did to Japanese-Americans.  When he received a $20,000 compensation from the U.S. government, Takei donated all of the money to help establish the Japanese American National Museum in Los Angeles.

“There are children of people who are bitter about the internment. My mother particularly said, ‘it’s the radish that stays in the brine that gets pickled.’ There are families that stay in the brine,” Takei said. “My father was, I think, really an extraordinary person, he was the one who suffered the most.”

Both of Takei’s parents were born in the U.S., his mother in Sacramento and his father in San Francisco, but they were forcibly removed from their home amid rising tensions between the U.S. and Japan after the bombing of Pearl Harbor. His father encouraged Takei to become active in the political process. He died before President Ronald Reagan officially apologized for Japanese internment. 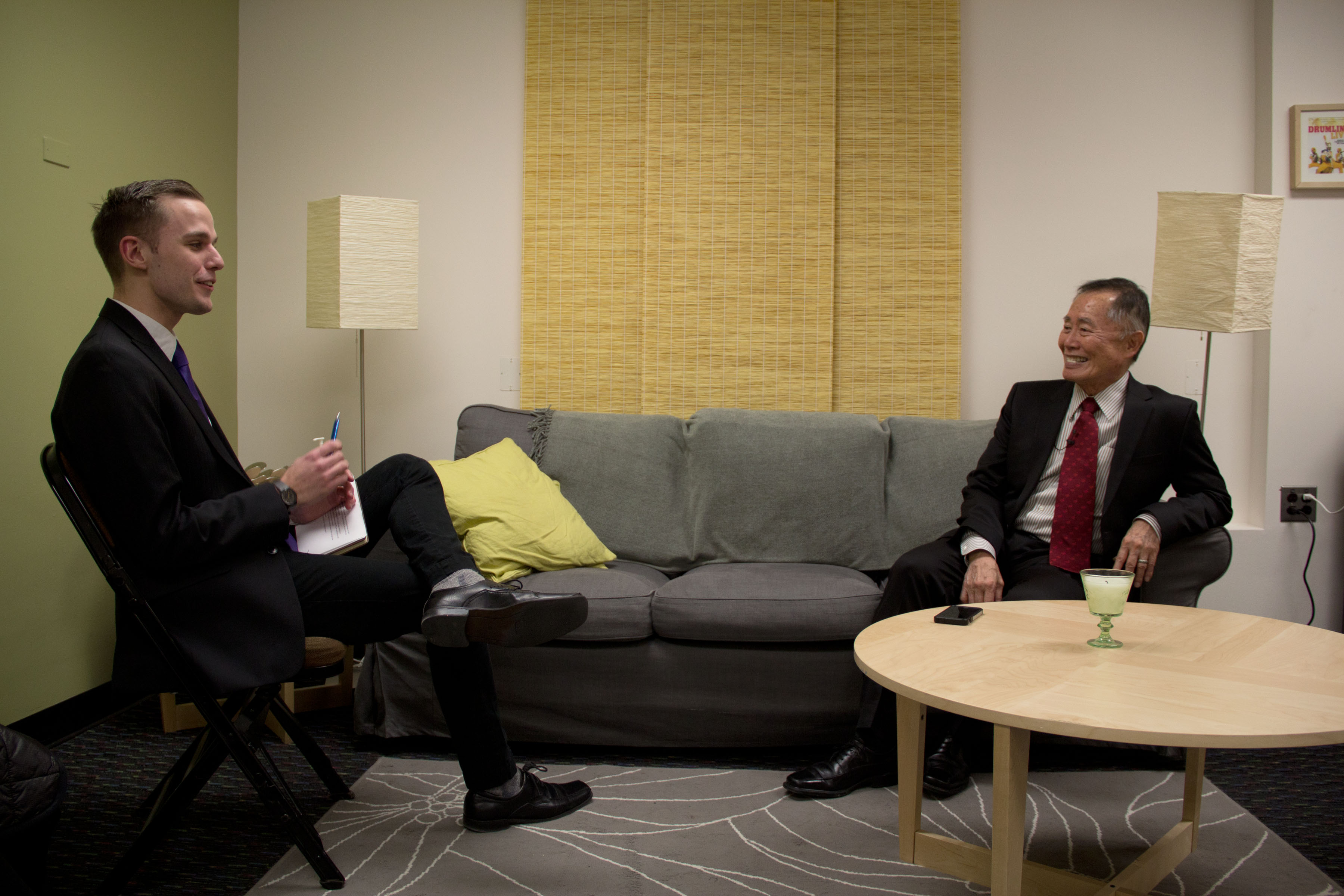 Takei is bustling with excitement as he shamelessly plugs his Broadway debut “Allegiance,” a story about forbidden love in a 1940s Japanese-American internment camp. While Takei may be hitting the main stage, he says Asian actors still don’t have “bankable stars” to green light a production.

“We are probably the least represented of the minority groups in Hollywood,” Takei said. “As white as the, at least the acting category of Oscar candidates were, I think African Americans have made astounding progress.”

Some of Takei’s most prominent activism is focused on equal rights for the LGBTQ community. However, Takei stayed silent for many years about the fact that he was gay, fearing it would hurt his acting career. Takei found some solace among LGBTQ people in Hollywood and in the gay nightlife scene, but was also cautious due to police raids of gay nightclubs in the 1960s and 70s. It wasn’t until former California Governor Arnold Schwarznegger vetoed the state’s marriage equality bill in 2005 that Takei, and husband Brad Takei, decided it was time to speak up. Since then, Takei has been a LGBTQ rights powerhouse and just last year won GLAAD’s Vito Russo award for his contributions to the LGBTQ community.

“Any social advance, improvement, transition, it’s two steps forward and a step back,” Takei said. “But it is a gradual progress and I know that we will have made tremendous progress in the next 50 years but they’ll be more to go. It’s a slow slow process.”

This progress, according to Takei, gives LGBTQ people in the U.S. more options than they have ever had before. This includes living in areas that are more accepting or even being able to stay in areas while trying to spark change.

“It’s all up to that individual,” Takei said. “Stay where you are and try to change that community that you’re in or move someplace else, a big city, New York, San Francisco, or a charming mid-sized city like New Orleans where you can be more comfortable and not have to work so hard.”

Takei and his husband Brad have been together for 31 years and were officially married at the Japanese American National Museum in 2008. The key to their relationship, says Takei, is to never go to bed angry and for Brad to make him his daily morning green.

Even as Takei chatted away, Brad was busy making a mug of hot green tea.