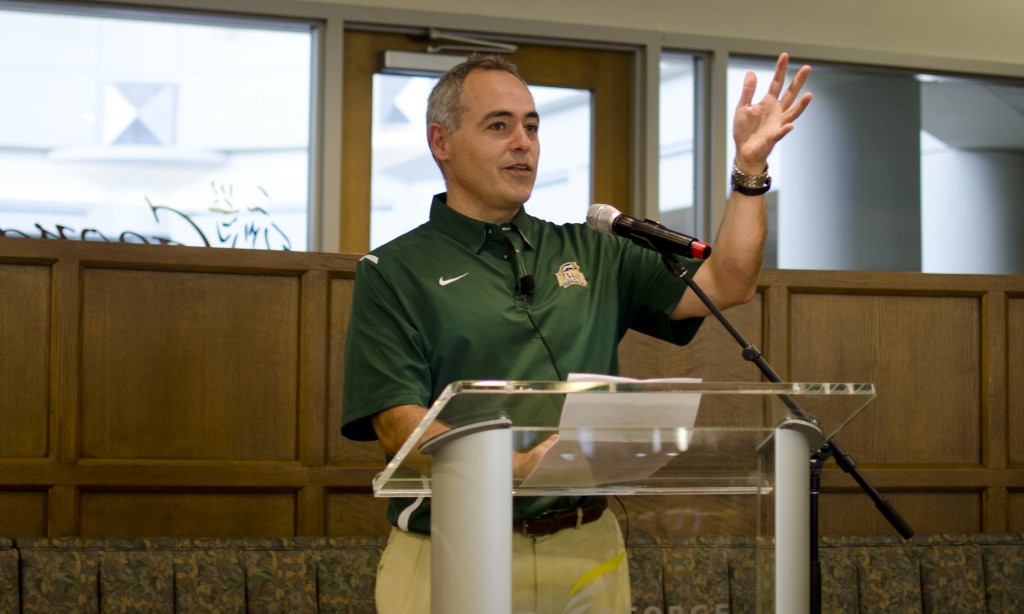 President Cabrera gave the state of the university address at George’s on Sept. 20. (Christine Florence/Fourth Estate)

Phil Izzo of The Wall Street Journal released an article stating that the college class of 2014 is the most indebted class thus far. At this year’s State of the University event, President Cabrera reassured alumni that Mason has one of the lowest default rates in the United States.

“[Students should] be very, very proud of their university,” Cabrera said.

Moreover, out of all of the students enrolled in the 2014-2015 school year, more than half are minorities or first generation college students. There is no demographically-determined performance gap among students.

Although it might seem to be a positive that Mason is ranked in the top 100 of “Times Higher Education” universities under 50 years old. The “Academic Ranking of World Universities” has also placed Mason in the top 200 in the category of Performance in Academics.

“[It is] a mistake to link success to rankings,” Cabrera said. “Our success is the success of our alumni.”

Mason’s success is also linked to the opportunities and facilities it offers its students. The last school year was the biggest fundraising year in the history of the university, enabling Mason to become a “top-notch research university,” Cabrera pointed out.

The transition into a research university also calls for the continuation of Mason’s tradition of construction. The next construction project will be a building which will cost $10 million and will be dedicated to health programs. At the time of the presentation, Cabrera called it Academic Seven and said that it could change depending on how the building is funded.

Along with these changes, in 2014, Mason signed a partnership with INTO, a program committed to recruiting international students. The Mason Inn, now called the Mason Global Center, has been converted into a housing option for INTO students and has an additional dining option called The Globe.

Because of the merge, SPGIA is one of the largest schools of study in the nation. According to Cabrera, the merger was necessary to furthering careers and improving Mason’s spot in the top rankings.

For the 2014-2015 school year, the state ended up cutting an additional 5% in Mason’s and other universities’ budgets.

Cabrera said the cuts are not a new trend and have been occurring for the last decade. The cuts are not exclusive to Mason or even Virginia and help explain rises in tuition costs. If the trend continues, students can expect the increase continue. If Mason becomes less publicly funded the school may be forced, as Cabrera put it, to “behave like a private university.”

Throughout the discussion, President Cabrera made a point of welcoming the alumni home, and making sure they understood that they are still an integral part of Mason’s success.

“The achievements of Mason are resonating around the world,” Cabrera said.

Christine is a Lifestyle Writer for the Fourth Estate and a senior studying Communication. She spends most of her time obsessing over puppies and talking about Denmark.
View all posts by cflorence →

Mason’s dialogue on the events in Ferguson